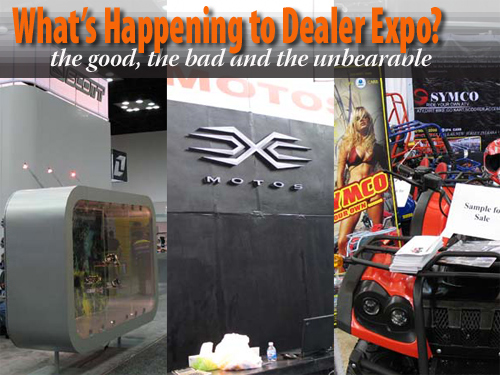 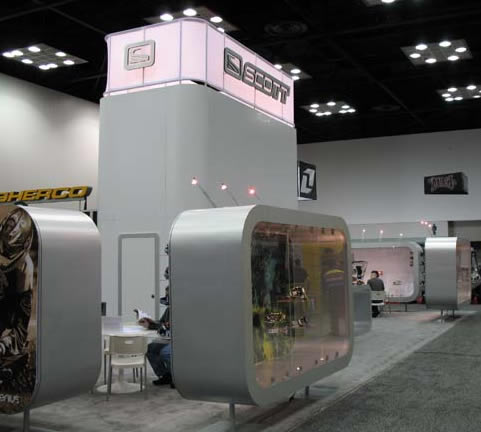 Scott’s inspired booth for their Genius Boot was an oasis of clean design in a desert of unfortunate mediocrity. 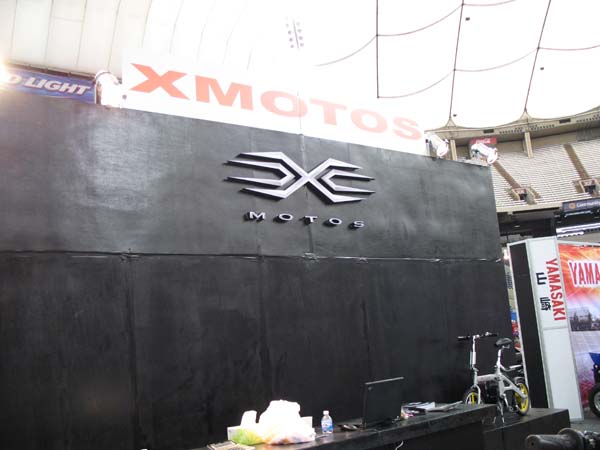 Dome visitors had to negotiate this massive expanse of rattle canned plywood stuck together with caulk, Gorilla Glue and baling wire. 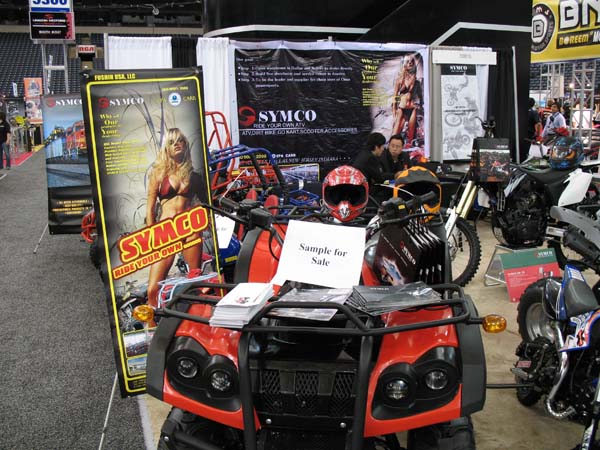 Indy’s losing it’s luster. Time for a critical look at the marketing flaws besetting the industry’s main event and what it could mean for dealers who depend on the aftermarket.

(INDIANAPOLIS) The term Expo goes back to Exposition, or Exhibit, and was originally associated with the international event known as a World’s Fair. In the United States these intermittent gatherings first arrived in the late 19th century before coming to an end domestically when the 1984 New Orleans show faded out in a bankrupt whimper.

Expos were like state fairs, less the blue ribbons for livestock and lemon pie. For a fee vendors got to strut their stuff in front of an audience hungry for knowledge and eager to see what was fresh, new and fabulous. Before tv, radio and the internet, the World’s Fairs delivered the latest industrial, scientific and cultural breakthroughs.

During their run in this country, awestruck fairgoers gathered to witness their first telephone, eat their first hamburger and peel their first exotic banana. Then came infomercials, cable and text messaging.

From Card Table Displays
With origins tracing back to the mid-60’s in the basement of a long defunct Daytona Beach hotel, Advan$tar’s business to business Dealer Expo is suddenly looking downright creaky. The effect a show struggling for identity might have on dealers down the road could be significant.

Last month we looked at a few highlights gleaned from February’s annual event. Scott’s Genius Boot pavilion (top left) featuring a well done Blade Runner-esque display theme that communicated the spirit of the product and combined it with an informed traffic pattern was inspired design.

Rev-it’s exhibit likewise was refined and refreshing, projecting the line’s elegance from an understated surround that projected high-end consumer value and product content. Other predictable standouts included Alpinestars, Dunlop, Troy Lee and Scorpion, and Ogio, to name a few. But as marketeers first and consumers second we were struck by the number of unimaginative and underperforming marketing displays and merchandising tactics that in many instances have remained static — and ineffective — for years. Literally years.

Ordinary Equals Boring
The failure of show organizers to prevent the v-twin bolt to the resurrected rival back in Cincinnati meant a certain loss of image theater. We remember the excitement Warneke and Faust’s very Euro HD retrofit components booth generated when Dealer Expo was still being held in the River City, and thinking if this is the face of the future hang on. Both product and packaging were methodically industrial and full of content, a perfect combo considering the venue. Instead, W&F stuck it out a few years before folding their exhibitor’s tent and attending future shows as spectators, in large part a decision brought on by the drabness of the surrounding selling environment.

(Now, in a twist of ironic fate, the v-twin market itself has tripped headfirst down that escalator of misfortune, partially a victim of hubris that denied the need to reinvest and budget for an effective and productive advertising and brand management program.)

Up and down the aisles, back and forth along the rows, it was a sea of sameness that revolved around Sky Mall portable displays, show lighting and block lettered vinyl banners suspended by tarnished brass grommets. Like black t-shirts at bike week, what once was vogue is now common — and passe. Bad mojo for the biggest domestic B2B opportunity for snagging new customers.

In what’s looking increasingly like a thrown together swap meet minus the occasional toplessness, the re-reinvented dome area sagged under a mantle of mediocrity and worse. We’ll say up front that exhibitors are free, within contractual limitations, to market goods and services in whatever fashion appeals to their sense of adventure. But taken collectively it was a sad spectacle more akin to Hoodia weight loss, cheap leathers and Italian sausage on Main Street at Daytona than a restricted trade event. 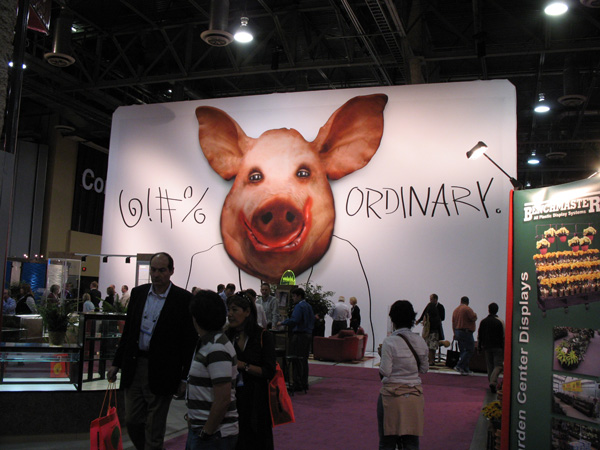 This is a good example of what’s meant by booth presence. Dramatic lighting, professional graphics, comfortable furniture, relaxing layout and convivial ambience all combine to create an impossible to ignore and easy to find vendor destination. Message? You want ordinary, shop somewhere else.

For too many, it seems the ROI yardstick is measured against booth cost and travel expenses, without regard for the effect inspired marketing has on a qualified audience that journeys through sleet and snow to check out the merchandise, subconsciously expecting to be entertained, wowed even, in the process. Plan on Cirque Du Soleil, get a squirt in the face from a red-nosed clown’s gag lapel flower.

Need Inspiration? Just Look Around
Marketing is an art form best served fresh. If you can date your booth’s inception to when gas was $2.75/gallon, you’re losing market share. If the only incentive a dealer has to stock your product is the product itself without benefit of modern selling aids, you’re losing market share. The competition for your customer is both intra and inter market, and to compete successfully you have to use the markers being set by the big boys.

Dealers are retailers, not merchandisers. Unlike the Targets, Nordstoms, Costcos and Starbucks of the world, they don’t have dedicated display departments to help put them on even footing with the mega-mall whose tenants want a chunk of that same discretionary dollar. This is occuring in a market where too many manufacturers want to lay marketing responsibility off on distributors, leaving retailers to struggle on their own and consumers to maybe, possibly find the products they need by whatever fortune telling device works best.

What’s missing? An understanding of the sophisticated competition that’s flycasting for the consumers increasingly devalued dollar. On the surface a trade show’s nothing more than a two-part cocktail poured over product and served in a tall, chilled tumbler. Marketing — the selling part — is how the manufacturer or distributor connects to the retailer. Merchandising is how the retailer connects to the consumer. 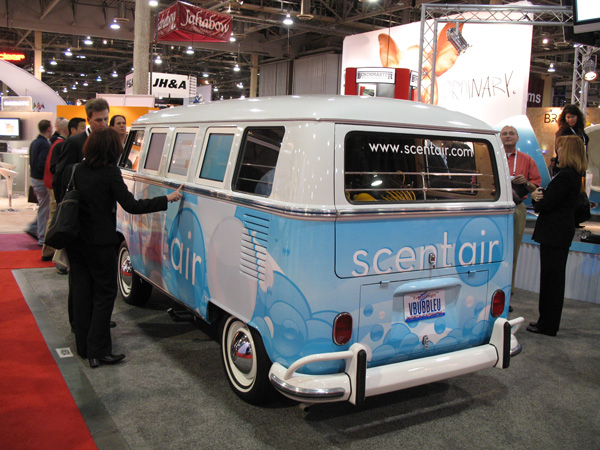 One of the hottest selling trends used by mall and stand-alone retailers around the country is the scented air sublime attractant. Amusing, sure, but — it works, playing off the powerful influence odor has on our behavior.

That said, where were the flat screen media walls? Aroma selling? Exploitation of the energy situation? Upscaled collateral? Where were the dogs, let alone the ponies? No floor talkers, no dimensionals, no engaging take-aways, no large scale graphics (exceptions noted elsewhere).

We’re not talking pens and Post-It pads. There was also a definite absence of innovative business to consumer marketing concepts ranging from loyalty and incentive to direct mail and quantity rewards on the part of manufacturers.

Consumer packaging was for the most part nonexistent. Predictably, POP techniques and materials were glaringly absent, excepting a couple of warmed over copies of concepts we introduced last year. It’s got to be said: dealer aids have little to do with laminated fixturing, slot wall and an 18x24 poster duct taped to the parts counter. Same goes for throwing up a MySpace page and thinking it’ll run unattended in perpetual motion. And fake foam rocks as atv props? Warn did it first, best. Everyone else, it’s time to move on, or get way bigger if you want to make a statement that matters.

Navigating The Show — Ahoy, Magellan
Add to the mix a totally incoherent booth locator that ditched the traditional bound-in show issue map in favor of a bound-in map well concealed in the dailies that few knew existed. That was piled on top of an ambitious (EventMingle) — and potentially valuable — online itinerary offered for the first time. Only problem is, few wandered the show with laptops hung around their necks. If they had, they’d of found the necessary wifi connectivity missing. Lewis and Clark would have easily discovered Key West if they’d used this year’s map to show them the way to the Pacific Northwest.

Making matters worse, the graphics were totally illegible even when viewed from two feet away on the occasional banner sized map hung inconspicuously on remote walls. We’ve been down this Expo road before. And before. How difficult is it to come up with an easy to read map, ala the London subway system, that’s intuitively designed, easily understood and then stick with the format? SEMA and PRI, both much bigger shows, manage much better directional graphics.

And why is all of this important? Because marketing and merchandising are the grease for the wheels of commerce. America defined mass consumption for the world and has been successfully exporting it abroad since Sears met Roebuck and Ford offered a choice of colors — black. Today’s consumers aren’t what they were 40, 30 or five years ago. Ads are slicker, metrics are better, channels are much more diverse. Shoppers expect to be entertained — a perfect example is your local Apple store, nearly all boasting phenominal turns in an atmosphere of fun and relaxation. Except for a few well deserved Top 100 winners, that sense of exuberance is a key component that’s underutilized in what should be a 25/8 fun market to sell to and shop in.

Helmets, Scooters And — More Helmets And Scooters
For a show where perhaps three-quarters of what was presented was derivative or duplicated in one way or another in surprisingly informal fashion, the recession and whatever else lies ahead doesn’t bode well for avoiding the hungry jaws of an organized, sophisticated retailing strategy that puts the consumer first. First in service, first in attention-grabbing selling techniques, first in courtship.

There’s also a disturbing trend, if KIA’s recent marketing shakeup is any indicator, of Asian spin being forced on traditionally American marketing concepts. While the top tier OEs continue to deliver fresh content and on-target messages, the same can’t be said for the emerging scooter and atv segment when taken as a whole. Left to their own devices, the examples we’ve noticed of imitative B2B applied to consumer marketing can actually undermine the entire market, not just any one manufacturer.

The army of faithful devotees will continue to gather annually, certainly as enthusiasts but primarily as retailers looking for that next irresistible consumer drawing card. But along the way SEMA, CES and the National Hardware Show are putting their best and brightest up front for the same purpose — to pocket that dollar, euro, yen and peso. You can almost hear the clock winding down.