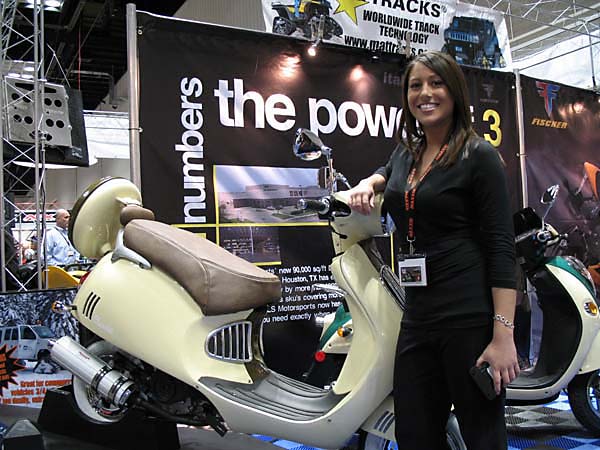 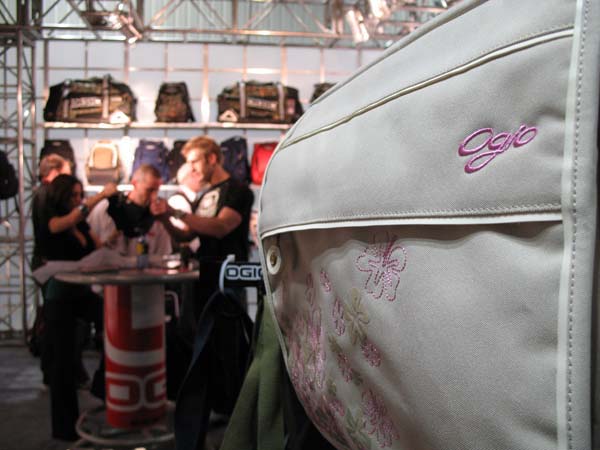 (INDIANAPOLIS) The name’s the same — Dealer Expo — and the area code seems fixed for the foreseeable future. But this year’s event had all the feel of a consumer goods show and not so much of the traditional mechanical panache. We may look back five or ten years from now and recognize 2008 as the year the industry reinvented itself.

If you were a dealer looking to go horizontal, the mood was perfect. The only things missing were front loading washers and Martha Stewart’s paint line.

To no one’s surprise scooters continued their march to center stage as the dominant trend driving new saleable product, with quality for the most part ranging from downright atrocious to remarkably good, with a big chunk carved out of the market’s center that’s acceptable from both a price point and a fit and finish POV.

One good example was flyscooters, based in Emeryville, California. Very affordable and led by an enthusiastic young marketing team, this upstart offers fresh product with an approach to match — they came as much to learn as to sell, and next year they’ll be back with an even better product.

While ATV sales themselves continue to slip, there was no shortage of accessories or hardware offered by established and emerging manufacturers. If you remember the days when Hell’s Angels senior management prowled the show floor, it’s a little unsettling to turn a corner and come face to hydraulics with the latest in agricultural dump trailers.

Clones Have A New Meaning If you were thinking about exercising that long held dream of opening your first motorcycle dealership, you could be excused for thinking you got off at the wrong exit.

Not that there weren’t rideable options at every turn — there were, as long as that option involved scooters, side by sides, atvs and quads. But the familiar two-wheeled motorcycle brands, or notions of brands, just weren’t around.

In their place was an endless buffet of look-alike, sound-alike clones of clones of clones, all representing what’s become a Pan-Asian revolving door for entry into the market on every conceivable level. Red, green, blue, yellow.

Like internet spam promising "joyful raised manhood" to consumers too stupid or stoned and dumb enough to bite, it may be that buyers of this particularly distasteful segment deserve what they get.

As for those scooters, I got a weird sense of a future where just like Sea Monkeys there’d be a day when two-wheeled transport was purchased off the shelf in egg form, laid on the garage floor, irrigated with a watering can and in the next instant ridden away on in the color and size promised.

That’s what brand differentiation looks like in the New Consumables Order. It’s true that Expo’s never been the main event for OEMs to strut their stuff, but that said it’s never been this devoid of genuine motorcycle content or top tier vehicle manufacturers.

Hats Off to Helmets Unlike the slowing motorcycle segment, a marketing heat wave was in full swing judging by the countless helmet options available. Nearly all good, if appearances count, and nearly all sporting intricate, high content shapes, graphics, finishes and options. The traditional manufacturers were there — Fulmer, Troy Lee, HJC, Bell. Meanwhile, over at no longer the industry upstart Scorpion’s booth, it looked like they were giving away product based on the traffic anxious to lay hands on their new EXO-Skeletal integrated clothing line.

But there was also a healthy collection of sassy newcomers, sporting unfamiliar brand ids like Wiki and Akuma. Oh, and SparX, with their cut-to-the-chase lets get naked marketing tease that works. In today’s global market hi-tech quality can come at you from any direction, and the first two were no exception. Both sported chromatic lenses, but used different technologies to get there. 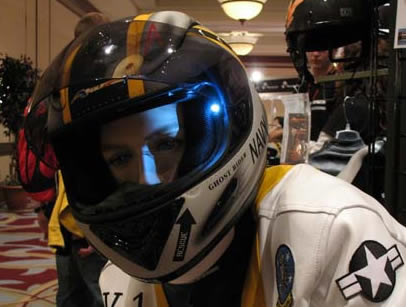 Texas based Akuma offered this interesting on several levels gear. Military aircraft graphics, Blue-toothed connectivity and a handy built in LED map light indicated some all-nighters on the design end.

Helmet trends seen throughout include a Battlestar Galactica inspired semi-half lid, matte finishes, and ultra-detailed graphics, all coming together for a very swoopy look that could - could - expand per user sales by creating a wider collectable category. This is familiar territory for sneaker makers, and it’s possible there’s a connection to be made on the basis of buyer profiles.

Direct to consumer and direct to dealer channels continue to blur, and it’s unclear what will be required to maintain the upper price points of the top tier makers. We can envision a time when a super economy of scale results in a handful of factories kicking out hundreds of brands, separated only by graphics, built-ins and the occasional collectors lid made entirely out of unobtanium.

Helmets by the pound, anyone? It’s okay to ask, "Are helmets on track to becoming a commodity?" Compared to, say, sneakers, it sure seems so. (Nike’s already there, with an infinite number of one-to-one consumer designed sneakers available online now. And building a helmet isn’t any more difficult than building a shoe.) 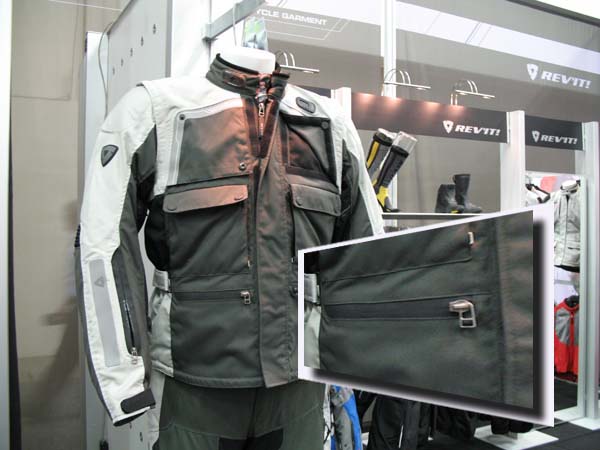 Lovin’ Rev’It’s Design Excellence
Take a look at the zipper detail in Rev’it’s Cayenne Pro model. Close attention to fit and finish was evident throughout, in fastidious craftsmanship and practical functionality.

Space Age Protection, Great Runway Look As someone with vivid recall of rain-soaked leathers that turned to a soggy, leaden Iron Maiden steam bath in the heat of a Florida summer, the design, styling and science of the current clothiers is nothing short of amazing.

Second only to lids in the fresh looks department were some exciting apparel choices, most notably Rev’it!’s line of truly state-of-the-art system oriented outerwear. A good bit of that amazement was in the form of three significant product callouts: crushable armour, ceramic anti-abrasion points of contact fabric — no, there’s no kidding — and some really innovative weatherproof zipper technology.

All the apparel manufacturers were offering great product, and some, like Rev’It!, seemed to really have their finger on the pulse of the consumer when it came to color combos and style points. With the notable exception of the questionable leather traders over in the dome, the fit and quality of this product channel continues to grow, offering the consumer tough choices when it comes to picking and choosing. 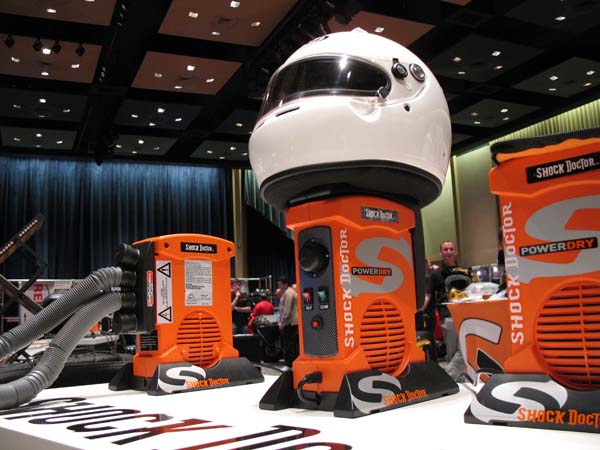 Shock Doctor’s a fresh solution for gear that’s not so fresh. Dries gloves, helmets, boots and apparel quickly and without damage while an ozone generator kills odor causing bacteria.

Is There A Doctor In The House We first discovered Shock Doctor’s booth at the Performance Racing Industry show last December, where the automotive crowd recognized a good thing when they saw it. Back for their second year at Indy, this newcomer to the powersports venue has a lot to offer, based on their tried and tested technology derived from other sectors. (To hear MPN’s Robin Hartfiel’s interview, click here.)

The fully integrated system that Shock Doctor’s been showing includes a premium gear bag in several sizes and a blower/dryer device about the size of a football that can dry the bag’s contents in a matter of hours or a helmet in a matter of minutes. If you’ve ever needed to freshen that off-road gear in a manner more efficient than leaving it outside the room overnight, you’ll appreciate what this giant leap for mankind represents.

Watch Your Step Of course there’s no good without a little bad. Particularly in the annex exhibit spaces and the dome itself, the event felt at times like a going out of business hardware store sidewalk sale than a premier industry show.

Putting powdercoated lipstick on this piggy front end assembly won’t change the outcome. This is crap, waiting to be sold by the unscrupulous to the unwitting. 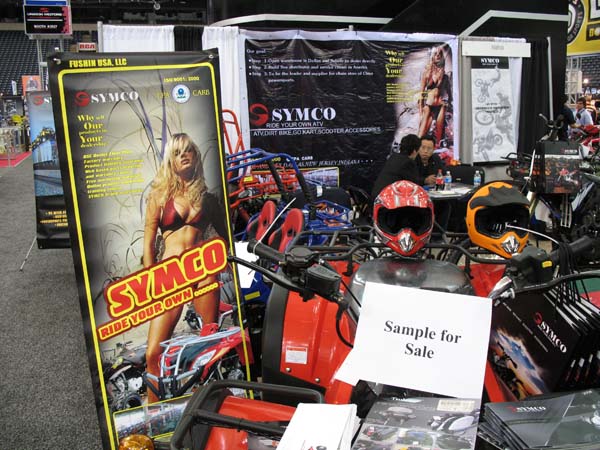 Note the cleverly Siamesed swiped product names. Lacking powerful pr, legit brands can only react and hope for the best. 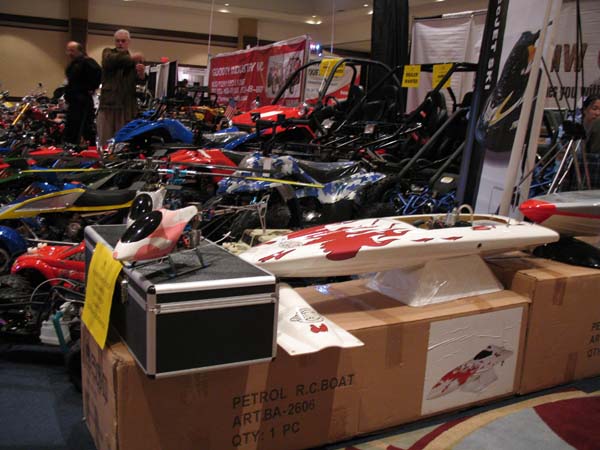 Even though adult two-wheelers were a little short, buyers could always arrange for a stocking order of radio-controlled gadgets.

Hmmm, what’s this? Radio controlled model helicopters? Tunnel boats? Faux IRL racecars? Who let the dogs out? Advan$tar can claim neutrality as a cover, but the fact remains: if the event’s branded as powersports, attendees have a right to expect some truth in labeling.

In fact, a number of the so-called "brands" seen mostly in the dome were nothing short of jaw-dropping. Yamasuki? Symco? Made-up combos that, like a Chinese menu, combined one recognizable maker from column A, one from column B, and slopped them together for a cheesy chop suey. All promised parts and service, dealer aids and no minimums.

That these booths were allowed within 300 miles of legitimate marketers is reason for immediate concern. Concern not just for potential sales lost to legitimate manufacturers, but for the iceberg of disaster that’s sailing into powersports waters if/when this junk hits the streets.

Right now, there’s no easy way for the novice consumer to discern between ripoff or original, quality or crap. Like internet spam promising "joyful raised manhood" to consumers too stupid or stoned and dumb enough to bite, it may be that buyers of this particularly distasteful segment deserve what they get. The would be sellers, though, know exactly what they’re doing.

Missing And Missed Polaris was conspicuously absent, after last year’s much heralded intro of their bagged touring streamers, as was relative newcomer Hyosung. Tedd’s V-Twin, after faithful attendance for who knows how long, was another familiar face not seen. It’s hard to discern if the Chinese contingents drove these and others away, or if the hard economic truths of the day played a role. One thing’s certain — without the Chinese and to a lesser extent the Pakistanis, this year’s Expo could have been walked in a few hours instead of a few days.

My overall impression of the dealer attendees themselves was that more than a few were of the work-from-home eBay reseller variety — no history, minimal investment in the upfront, looking for the next quick buck. For them it was a quick dash up and down the aisles, buying by the pound regardless of content or purpose. This approach works okay for garden mulch and Elvis on black velvet paintings, not so well for products that may involve after sale service let alone issues of product safety.

Because there’s currently no satisfactory method of tracking sales, the show’s success or lack of is pretty much up for grabs. For organizers it’s always an unqualified success. Trade wonks use seat of the pants dead reckoning based on aisle interviews and barstool shoutouts to gauge what went on. But without solid stats, it’s nearly impossible to assign actual trend lines as a market indicator.

In the end there were winners and losers. Some showed great new chops in the event marketing department. Many still labored one step or less removed from the flat black spray painted plywood booth display. Very few focused on current events — global warming, $100 a barrel oil — as a sales generator. Likewise a big gap in dealer sales aids.

Final thoughts are still forming as to what the industry will look like a decade from now. There’s no doubt that most of us, maybe many more, will still be riding. What, where, how and when is up for grabs.