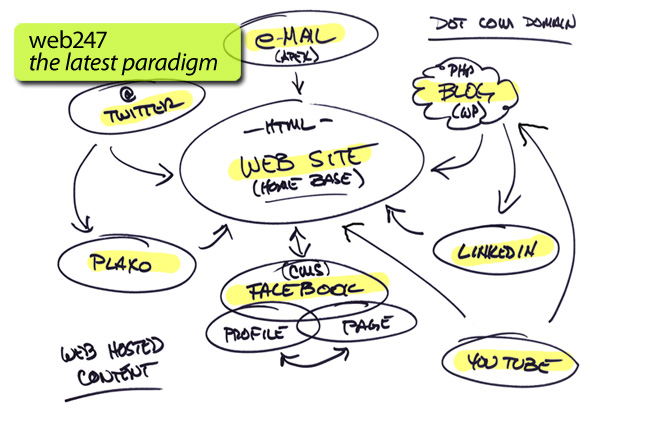 Managing Your Many Online Relationships

As recently as six months ago, corporate participation in social media was still considered optional and leisurely. What’s changed since then? Everything.

A Ad Age piece by Forrester Research VP-analyst Josh Bernhoff reveals that while ad budgets themselves won’t see much change in the next few years, the percentage allocated to online activity will nearly double. The bulk of that will go towards search advertising, but social media will see the biggest percentage gain in budgets.

What’s a good approach for managing corporate image in a community environment?

The implications are significant: ignore active and qualified online content management at your own peril.

tip: Even if you’re not ready for the demands of an expanded community footprint, wait too long to register and you’ll lose your claim to a unique id.

In the beginning, just about two decades ago, online communication was defined by ASCII (binary) “e-mail” sent sans attachments to other members within dedicated networks like CompuServe, AOL, Genie Net or the ubiquitous bulletin board yak sites. High speed was a 2400 kbs dial up modem, and a $600 fax machine was the file attachment method for sending coarsely scanned bitmap hard copy on now extinct thermal paper that turned sepia the minute it hit the sunlight.

Hi res? Ha! Seeing that scenario still visible in the rear view mirror today is akin to institutional knowledge of the town crier and smoke signals as efficient methods of mass communication. The internet then was pretty much off-limits; intranet was the two-lane gravel country road we meandered down, waving in slo-mo at the neighbors over the fence as the mule drawing the buckboard stopped to graze. In that short period of time business has gone from individually typed originals (with three copies via carbon paper and onionskin) to instant distribution for a global audience.

What’s considered Web 1.0 popped up in the appropriately named dot.com decade of the mid-nineties, as the content restrictions of the internet gave way to the open freedom of the html-rendered world wide web. Then, around ’05 or so, Web 2.0 came along, built mostly around the evolving concepts of social or community media, primarily blogs, the increasing availability of broadband and a wonderful new dimension called search.

Today, it’s Web 3.0 (or web247), reflecting the explosion of Content Management System (CMS) online hosted social media apps that have flourished to the extent that top-down communicators like print and broadcast are seriously threatened as content distributors of mass media to a finite audience.

how much is enough? For the millions of online communicators who now find ourselves dedicating more and more time to twitter, Facebook, MySpace, blogs and whatever new online journal that sprang up overnight like a mushroom after a gentle spring rain, you may think there’s not enough time in the day to take care of all the required monitoring and posting. Well — there’s not. And definitely not if your concern is marketing to an increasingly elusive audience while you’re still struggling to define an appropriate online strategy.

The challenge is two-fold: how to actively cultivate a social media presence, and how to avoid the consequences of having your online footprint defined by others in the absence of a strategic official presence.

The sketch above is my world of late. It wasn’t until I started doodling for this article that I realized how chaotic things had become.

University of Michigan psychology professor David Meyer wrote in the New York Times last spring that, “We have to learn when and where multitasked social networking media actually help us carry out our daily tasks rather than interfering with them.” Boy howdy, Dave. I’m off to buy a stopwatch.

Loosely organized around a basic html web site, my online brand ballooned after plugging in a WordPress blog app to handle the more spontaneous thoughts that maybe don’t quite rate their own html page. This combo platter of html/php worked great until the latest innovation on the block — web-hosted social media — broke out as yet another spoke in the wheel of connectivity.

web centric social media Community media is, for now, the place to see and be seen. The dire prediction from eye of the storm tech venture capitalist Marc Andreesen — Netscape founder, Twitter investor, Ning co-founder and on the boards of Facebook and eBay — in the July 10, 2009 issue of Fortune, goes like this: the web will take over all aspects of our lives. Period. TV — so long. Print? Adios. His repeated shoutouts to papers that they should just shut down the presses today and end the needless suffering are well known if not downright scary.

One thing’s for sure — you can’t argue with the trend. Facebook’s on a definite roll (250 million-plus users and counting) to mop up MySpace as the repository of everything private about your life you think really needs to be shared with total strangers, and they’ve got the Must Register To View Page sign up numbers to prove it.

LinkedIn and Plaxo are slugging it out for professional id registry bragging rights. Twitter is — well, twitter — while YouTube and Flickr continue to take care of free digital hosting needs that easily interact across the spectrum of push-pull embeds. And ning? If you’ve got the posse, this is where you set up your very own branded micro-social site. Just like Enrique Iglesius, for instance. Whew! Got to rest for a moment and regroup.

search first, call me in the morning According to the Public Relations Society of America, over 90 percent of reporters use online search to source their material at some point. At first this meant loosely defined web site hits only. Then blogs kicked in and aggregators like Technorati made it easy to spot comments on the fly. Today, the major search engines can look inside blogs as well as html sites and return any number of hits which may or may not include comments you’d like publicized, regardless of who authored them.

Which brings us to the very real and getting bigger question of brand management in a social world where there’s no control whatsoever over who writes what and where about your product, company or message. How much visibility is required? Who’s responsible for oversight? Is activity scheduled or responsive? Adding complexity is the fact that as information distribution has shifted from leisurely print to instant online, so to has the process and organization. Active and engaged social management of your brand is now the best option available for influencing and shaping public opinion.

A perfect example is Southwest Air’s recent inflight fuselage failure. Ad Age, in their July 17 issue, singled out social media director Christi Day — whom I met in Tampa at a PRSA event covered last month here — for her deft handling of the situation via twitter as the model for community engagement. “It was important for us to set the tone as soon as we saw those conversations begin online,” Ms. Day said. “We were able to distribute factual information to our customers before they saw it on the 10 p.m. news, which is extremely powerful.” So while much is made about twitter’s modest retention rate, the 375,000-plus followers of Ms. Day’s work for SWA seem not to notice. The same can’t be said about competitor Delta’s meager efforts in the same arena.

public relations — on top to stay The reemergance of public relations protocols in an image management role, one that’s uniquely well suited to the fast pace and instant trending of a social online environment, answers the bell perfectly. Style does matter, and PR’s qualified capacity to quickly massage a message for the unique 140 character constraints of twitter or a slightly more expansive get seen quick microblog contents page is a major plus in an atmosphere where goofs and glitches make it onto YouTube in perpetuity and beyond.

Proof this is so? Why right over there, where just last month the Cannes International Advertising Festival — high holy temple to all things advertising — awarded the most Grand Prix trophies ever handed out to a simple at first glance PR campaign. You might have seen it featured in the news at one point or another: the Best Job In The World contest by CumminsNitro, for Queensland, Australia’s tourism council, brought home unprecedented gold in multiple categories — PR, Direct and Cyber. Public relations creative is now officially recognized as a major factor in a successful communications strategy.

Conclusions are few and direct. In the very short existence of web interactivity, the need for supervised active management has gone from optional to mandatory. Qualifications required for that job have likewise ramped up to include organizational, oversight, web logic and engagement capabilities. That’s where we’ll leave it for now, as I step back and take stock of the weeds growing in my own garden.