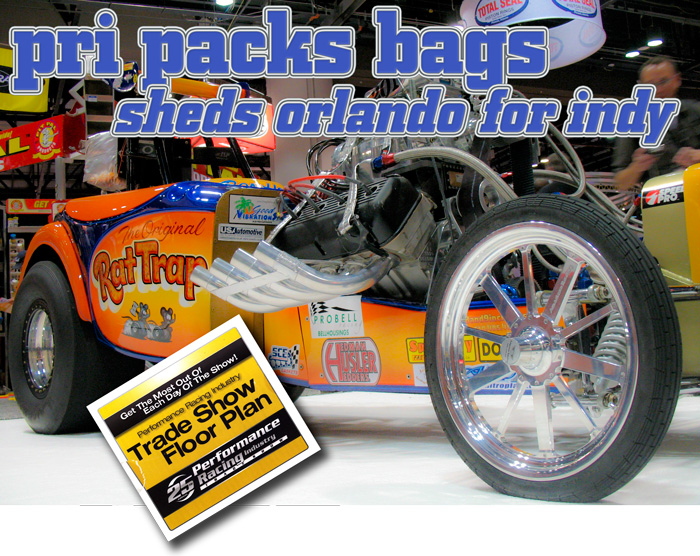 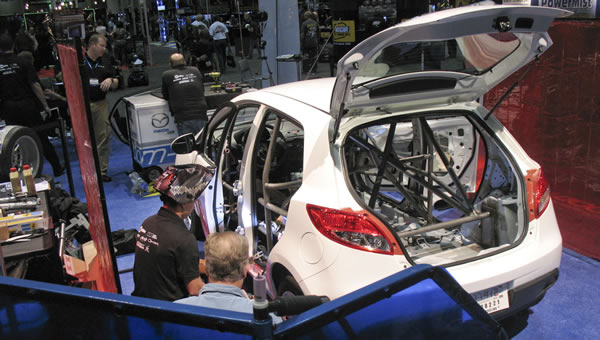 MazdaSpeed B-Spec Live Build MazdaSpeed promoted their B-Spec conversion kit with a live build during event hours. The thrash began Thursday when a box stock Mazda2 had its plain Jane guts ripped out and in just three days the transformation to blinglicious race ready club car was complete. 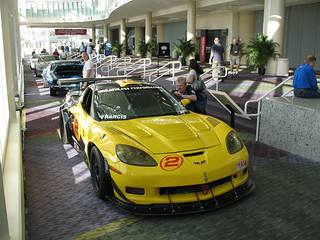 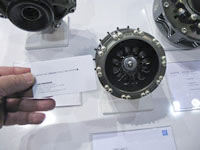 (ORLANDO) When the sun set on the 25th Performance Racing Industry (PRI) trade show, held for the past eleven years under the roof of the massive Orange County Convention Center, it marked the final curtain on a run that began a quarter-century earlier in Louisville, Kentucky, by show founder Steve Lewis.

news PRI was bought earlier this year by event behemoth Specialty Equipment Market Association (SEMA), who at the time indicated a business as usual approach to their new property.

The bombshell for most in attendance was the announcement just days before opening that SEMA had just bought PRI’s 2009 startup rival, the much smaller International Motorsports Industry Show (IMIS), and that both shows would be merged in a return to Indy in mid-December, 2013.

The new owners wasted no time in shaking up what had been a set piece that only last year had declared that PRI would stay in Orlando for the foreseeable future.

Ironically, PRI was originally conceived in 1988 as a breakaway from SEMA, which was then still operating as the Speed Equipment Manufacturers Association.

After the first two PRI open to the public consumer attempts in California proved unsuccessful, the fledgling event moved east as a trade only show to serve the racing markets concentrated in the Midwest. This winning combination continued to grow over the years before peaking right before the economic downturn of the mid ‘00s.

challenge This year’s event was still in recovery from the significant decline in exhibitors after the 2007 recession bungee jump, the uncertainty surrounding the Detroit bailout the following year in ’08, the post recovery refocusing of marketing priorities by the motorsports manufacturing community, and growing competition from a rapidly maturing eTail online segment.

We talked for several minutes regarding the properties, styling, etc., and in the process establishing a valuable connection. I took for granted (my bad) that the sparse textile manufacturer’s brochure used by the vendor and thrust into my hand would include contact info. Now, without any identifying collateral, I’m at a loss about who to buy from.

Add in defections from PRI to rival IMIS, which split off in 2009 for an identical event held the week after the Orlando show by siphoning off booth buyers and floor traffic alike for a sentimental Indy hangout, and it was easy to get the feeling that while the patient would survive, there had to be a major change in the show’s market dynamics.

PRI now heads back north to Indianapolis, home from 1998 to 2004, for a unification one-show of hard core racing parts and equipment under the SEMA flag, completing a circle that began a quarter century earlier.

Waiting for the dependable show shuttle en route to the familiar North Concourse I recalled 2006, arguably PRI’s peak year and for me easily the most impressive with every square inch of the massive million plus square foot hall occupied.

Six years later PRI’s finale didn’t go out with a bang, but more of a sigh, as the annual forum for racing parts manufacturers, teams, and resellers continues to adjust to a rapidly evolving business landscape of smart phones and tablets and a generation more comfortable with texting than in-person conversation. 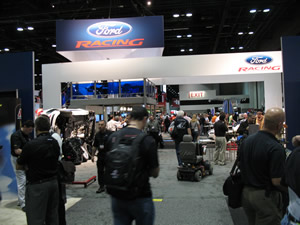 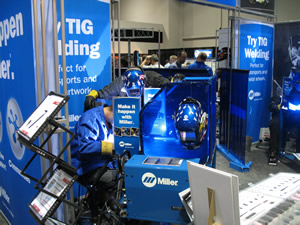 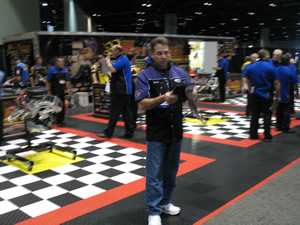 marketing performance — pri gets it right

3rd row Miller Welding had one of those booths that was hard to resist — step right up and weld.

bottom Social media includes self reported. This interviewer uses a tablet to prep video for upload.

inside the hall With more than 1,000 exhibitors in over 3,000 booths, including a scaled down but still impressive trailer and transporter show at the rear of the exhibit hall, walking PRI remained a formidable challenge. My opening day workout logged over seven miles of aisle strolling as measured by the pedometer I clipped to my pants this year out of curiosity.

I noticed far fewer racing organizations with booth representation, fewer comp cars decorating booth displays, missing or subdued sponsored trade delegations, and, surprisingly, no live after hours competition event exclusively for attendees and which has traditionally been a perfect opportunity for extended conversations. Even Machinery Row seemed to be missing some of its signature live buzz-worthy demos.

knowledge Still, with nearly 38,000 in attendance over the three-day run, PRI remains one of the best organized, laid out, and well supported industry trade events produced for any of the motorsports or powersports communities.

The larger picture includes a laundry list of timely seminars and conferences on a variety of topics ranging from track management to EFI setup to eBay selling techniques. It’s all part of the overall goal of improving attendees bottom line through better trade craft and market knowledge.

Whether time is spent in a classroom or on the show floor, there’s a massive amount of information available either through lectures or by engaging one-on-one in a booth conversation.

A perfect example was my discovery of what goes into a Forumula One clutch at the Sachs booth. The answer — titanium, carbon fiber, and $25,000 for each replacement.

Ford Performance, focus on Fusion, went so far as to combine two peninsula spaces for a total walkthrough takeover of the aisle, in effect creating a superbooth that worked very well. My impression was innovation at its best, and an outcome of what happens when an imaginative concept meets a receptive producer.

One intriguing booth that drew my attention was a vendor promoting the hi-tech energear brand offered by Swiss manufacturer Schoeller. The draw was a claim of organic energy recovery simply by wearing these magical shirts. Well.

Having just discovered the product (thus validating trade show value) and unfamiliar with the background, the marketing broke down as the vendor struggled to explain how the theory was executed. “It just does,” is short of convincing.

We talked for several minutes regarding the properties, styling, etc., and in the process establishing a valuable connection. I took for granted (my bad) that the sparse textile manufacturer’s brochure used by the vendor and thrust into my hand would include contact info.

Now, without any identifying collateral, I’m at a loss about who to buy from. Are you on twitter? Facebook? Have a web site? I’d like to order one of your designs — if only I could. 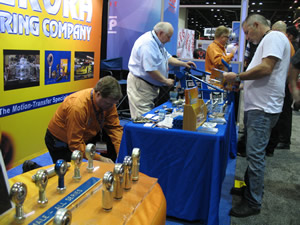 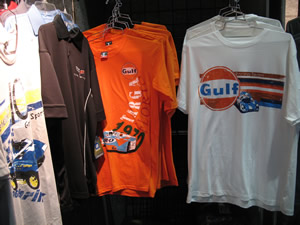 it’s just not the same online

Every time I encounter a situation like this I wonder how any business can budget time, money, resources and personnel without paying attention to the marketing details that ultimately make a difference.

change Whether the talk is about grass roots club racing — healthy — or the big ticket commercial side of competition, change is in the air.

Today’s t.v. audience is fragmented like never before. Cable keeps looking over its shoulder at net streaming, while broadcast depends on an empty diet of reality to stay afloat. How motorsports will maintain a connection with the consumer isn’t at all clear.

The previously announced merger between the American Le Mans Series (ALMS) and NASCAR’s Grand Am program set the stage for ALMS marketing director Ed Triolo to predict a robust new marketplace for the as yet unnamed series that once rebranded will buck the lagging attendance plaguing other organizations thanks to a strong presence from premium sponsors.

Meanwhile the rousing reception given F1’s debut on a revolutionary new track in of all places Austin, Texas, may hold part of the key to solving the puzzle of how to rebuild lagging interest. As a facility, the Circuit of The Americas seems as much a destination as Disney.

It’s clear the switch from low to high tech is complete. When NASCAR mandated drive by wire EFI, digital was all in and seat of the pants (call it intuition) analog was out. Eventually, carbureted competition will seem as archaic as a Kodak InstaMatic.

Today, drivers at every level train on simulators. Builders prototype with 3D printers. Tuners use simulated courses for analysis. From budgets to nutrition to logistics to maintenance, every aspect of driving competition is ruled by the computer, and much of that is available as an app for your typical smart phone.

The human element notwithstanding digital, while efficient, is also much more sterile. Which is kind of like the feeling I got, walking PRI in Orlando for a final lap.