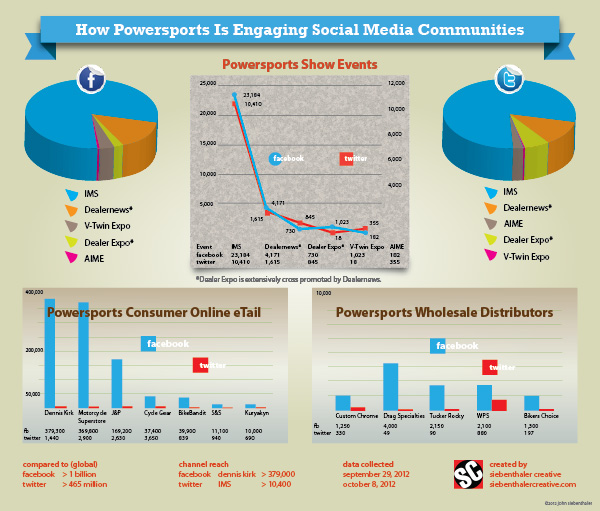 Several requests to eTailers for comment on social strategies were declined.

Neither wholesale aftermarket distributor Tedd Cycle V-Twin nor trade publication and event sponsor American Motorcycle Dealer support social media channels and so were not included in the graphic.

As the tail end of the of the 21st century’s first decade drew to a close, social media began to show serious potential as a marketing solution.

After the collapse of print the first choice of media shifted to social channels simply by default, with little concept of what to do after pitching an online tent.

Powered by the prarie wildfire success of one-time campus friends startup Facebook, the once mighty – and slow to respond MySpace – was trampled into the dirt and left behind by the crowds rushing for the exits.

LinkedIn battled Plaxo for superiority in the Strictly Business bandwidth, while indy offbeat channel twitter perched on a brand new branch of the social media tree, where it continues to prosper as a short form adjunct to more content heavy sites.

Newcomers include Pinterest and mobile app Instagram, both rapidly laying track for their own niche and even more social community growth.

The numbers tell the story of why today any marketing plan – large or small – simply cannot afford to ignore the online space controlled by the Big Three, or at least the Big Two: Facebook, with over 1 billion registrants, and twitter, quickly nearing the half-billion user mark. From corner hair salons to Amazon, social media is regarded as either critical or essential but it’s no longer optional. Why? Because that’s where the customers – and dollars – are.

“Understand why and how your audience uses technology and then start trying to align your communications efforts.”

Ideally, a social media content manager would be able to juggle all these and more, including Google+, YouTube, and Flickr, as well as a resurgent MySpace, alert for mentions and opportunities to engage. The fact is, every new app vying for consumer approval is building their corner of the web on some aspect of social media.

Even if you’re making use right now of workflow apps like still in beta Tawlk, realtime monitoring across all the potential channels is a job best left to the National Intelligence Agency. Or, assuming budget allows, one of the many commercially available services that specialize in the metrics of social measurement and tracking like HubSpot.

While your personal Facebook or Pinterest page is an activity that can be categorized right beside stamp collecting and competitive eating, company pages are anything but a hobby. And they shouldn’t be treated as one, unless wither and die are operational goals.

Success Depends On Having Talent Available

Companies need to have qualified talent either inhouse or on call, a digital resource that can rapidly act and react to social opportunity and can set the table for engagement and word-of-mouth clout. Toolkit basics should include photography, art, copywriting, production, and PR.

These days, businesses are competing for smaller and smaller pieces of a very large pie. It doesn’t matter if your market is restricted to a single zip code – the path to reaching that market still requires digital know-how and communications talent. If you’d like to continue the discussion, lets connect.