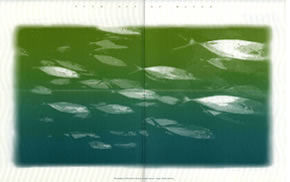 inspiration Based on Sacramento’s Art Directors and Artists Club (ADAC) 11x17 newsletter format, ASMP members contributed photography, I wrote copy, and local art and creative directors were enlisted to make sense of it all. In its short lifetime, the ASMP newsletter represented the outstanding creativity of Tampa Bay visual and writing talent.

purpose Bridge building between ASMP and members of the professional creative community. AIGA and AAF art and creative directors, graphic designers and account execs were targeted to communicate the value of professional photographic content, using a medium (direct mail) they were familiar with.

credit This premier issue featured the exceptional design talents of Wendy Sherman, who used a Mac II, Adobe Photoshop, Macromedia Freehand and a Linotronic 300 scanner to create the first all digital document I’d ever worked with. The hard disc was delivered to the local production house for final digital conversion and output to film.

In the early days of the internet (dialup modems, bulletin boards, and dedicated channels like AOL and Compuserve) and many years before the web arrived onscene, causes, corporations, and clubs produced and printed newsletters to formally communicate with members, employees, and their designated publics.

Using managed lists of recipients to control distribution (and print run), newsletters were usually mailed to members and others and usually enjoyed a high readership and pass along rate.

The 2010 BP disaster in the Gulf of Mexico was reminiscent of an editorial comment I’d written over 20 years earlier.

In 1989 the Exxon Valdez dumped its toxic cargo of poisonous crude oil into Prince William Sound, Alaska. That event inspired what I wrote about the catastrophe for the ASMP Central Florida chapter’s Images newsletter. Only the names have changed.

Most prudent people wouldn’t try to ship 10 million gallons of aptly named crude oil via a party boat, the S.S. Exxon “Minnow”. Nor would they put Gilligan in charge of steering, regardless of who wanted to go water-skiing.

Since parking their boat on the nearest reef and dumping a disgusting cargo of glop, not unlike the goo that oozes out of the sides of Polaroids, these have not been good times for Exxon.

Since the “spill”… as though this were a paper cup of Kool-Aid dropped by a rambunctious third-grader… Exxon has come out with a couple of whiny, self-serving apologies to the American people.

Their use of visuals, in one case a kind of Grandpa Walton sort happily pumping $1.25/gallon gas into what is believed to be a “full-service” customer’s tank, pales beside the forlorn images of oil-besotted otters vainly attempting to clean themselves.

There’s a lesson here. A timely picture of the result is still worth a thousand words of rebuttal.