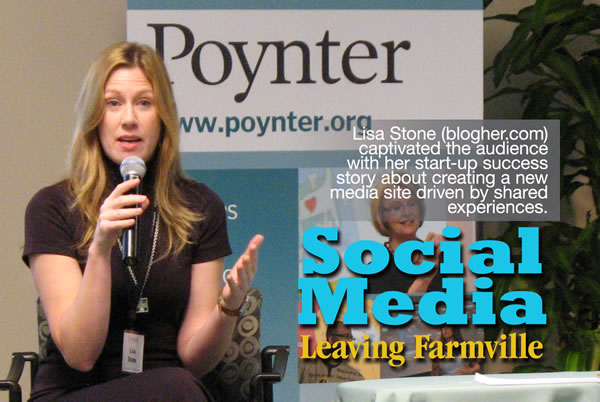 Charlene Li, one of social media’s most sought after forecasters, skyped in to deliver her presentation, touching on the need for corporations (and by implication associations) to more actively engage their communities professionally before putting forth her views on message control.

Her skype pres and follow-up Q&A was very much Max Headroom-ish in format, a style the new media visionary used effectively in laying out a view of the global impact exerted by social’s exponential expansion on both corporations and governments.

Poynter’s use of skype over similar distance communicators underscored how ubiquitous the service has become. Quality was excellent, interaction between moderators and speakers added depth and dimension well beyond average conference call.

(ST. PETERSBURG) If you use, have used, or are thinking about using social media professionally, you’re probably aware it’s not all about facebook pokes or tweeting personal dilemmas that arise from having to choose between Frosted Flakes or a peanut butter and bannana sandwich for breakfast. In large part built on the cult of celebrity, losers have mainly been anyone and everyone connected with traditional publishing.

For professional communicators, that issue may be critical for any hope of future survival.

It’s just been in the past couple of years that the concept of social media has spread from online niche to mainstream culture, an integral part of the everyday fabric defining our personal and professional lives.

So while there are still isolated pockets of resistance here and there, for the majority of the population it’s a technology driven component of some or all of the daily routine.

facebook - yes, but Recent news of facebook’s overtaking Google as the most visited site — and the social media gravitas implied as a result — partially misses the point.

In fact, Google is a critical — twitter search, for example — background player in social, including multiple points of intersection (site stat analytics comes to mind) that are passed through the search engine monolith.

It’s against this backdrop that The Poynter Institute’s November, 2010 inaugural Social Media Day collected some of the biggest stars of the Fourth Estate’s newest medium for an event that, rather than offering up Top 10 lists of how to attract new followers, focused on the flip side of the digital see-talk-listen coin — how to leverage social media’s sea change popularity with the commercial needs of professional communicators desperately in need of a platform lifeboat to replace the shipwrecked print and broadcast model.

word (bad) of the day: curate One of the main themes was the significant challenge of creating and improving media and methods to reach or carve out a new audience. Or community, the preferred reference that takes into account the interactive nature of social media. What emerged after a speed-date format six-plus hours of presentations and Q&As was a promising landscape populated with familiar editorial concepts and freshly minted journalism constructs.

For PR practitioners, editorial’s little brother and recently touted as the natural inheritors to a throne long occupied by advertising, the exploratory road maps served up could be invaluable to a profession that continues to struggle with the techniques of effective deployment.

Threaded throughout the conversations were references to the web’s insatiable appetite for content, which in turn has spawned curation-driven sites that many see as more cannibalistic than altruistic when measured against the massive job losses suffered throughout the publishing profession. Adding insult to insult are the word mills fed by thousands of hyperactive fingers pecking away at dollar-a-column keyboards in third world content provider cardboard cubicles.

For PR practitioners, editorial’s little brother and touted as the natural inheritors to a throne long occupied by advertising, the exploratory road maps discussed could be invaluable to a profession that continues to struggle with the techniques of effective deployment.

The segments were broken down into manageable bites; blogging, viral, content, management, format, production, etc., but the focus was not one of fan-friend-follow how-tos. Instead, presenters spoke of commercial enterprise and success within those loosely defined parameters based on social media’s role in a transitional journalism universe.

blogs are dead Not so fast, brother. Lisa Stone’s popular and growing fem-centric site Blogher is a powerful example of how viewer metrics are used first to define, then achieve goals. Her team’s interpretation of research shows they’ve found not just a sweet spot in the blog universe but a way to capture lightning in a bottle. She cited the startup’s near immediate profitability, in large part thanks to advertisers quick to recognize the dollars and cents potential of earned trust and online WOM.

Along the way, Stone has managed to concoct just the right retention recipe by stirring a delicate combination of original and contributed content. And while platforms like facebook promote, or at least don’t deny, the notion that blogs are dinosaurs in a social media world, the reality — according to Blogher’s research — is that gross numbers aren’t everything. It’s all about loyalty. 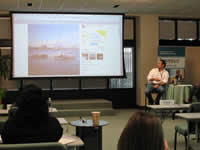 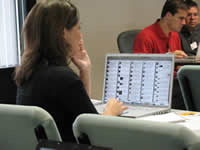 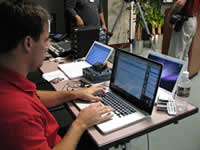 Charlene Li (charleneli.com), one of a handful of consensus (her bestseller “Groundswell” is consistently cited as a social marketing must read) engagement experts, addressed the open leadership approach to the newly defined area of social commerce.

we’re just so tired of powerpoint

One of the neat FYIs to come out of Social Media Day was the use of cloud presentation software here by Mashable’s Vadim Lavrusik for his pres here on how progressive news orgs are already generating revenue streams within social media channels.

User friendly Prezi features an intuitive browser GUI with believe it or not attractive graphic templates.

Content can be online edited from anywhere on just about any platform. The motion triggers — the main draw — work great for large and small audiences. Three signup plans are offered, beginning with free.

Her skype pres and follow-up Q&A was very much Max Headroom-ish in format, a style the new media visionary used effectively in laying out a view of the global impact exerted by social’s exponential expansion on both corporations and governments.

Greatest concerns? The intertwined and increasingly complex issues of privacy, permission, message control and reputation management. Acknowledging the sweeping cultural changes in how privacy’s viewed, she contends that informed user management of clearly stated options (for now) seems to be the watchword of the day.

Former Forbes CEO — he left the position in July, ’010 to launch Spanfeller Media Group (spanfellergroup.net) — Jim Spanfeller is busy developing new paradigms that would preserve the concept of professional (paid) talent in a content devouring world of aggregation (Huffington Post) and killer social media like facebook.

His first startup, thedailymeal.com, is staking out a claim in the densely packed marketplace of online culinary destinations, using a mix of curated, contributed and original content. The challenge: attracting venture capital for his inspired vision of creating not just another foodie recipe collection, but a hybrid site that would glue viewers in position, peeling off and serving their predicted interests in a seamless, continuous stream of unique and trackable material.

It’s a concept that, if realized, could generate the kind of profits needed to go beyond the current status quo of hordes of former writers prowling RSS feeds for their next meal. Not to mention the same hordes of former publishers who have watched in shock and dismay once mighty empires dissolve in fast forward real time.

Monica Guzman’s intersect.com may well be the lead wagon on the train west to discover journalism’s future home, existing on her unique startup site built on "where in time do you want to visit" intersections. It’s an intriguing original concept that seems to embody community in a facebook kind of way, but without the overt conditional hostility.

Maps, copy, art - all are part of a larger matrix of location-oriented search that defines content geographically within a flexible, user selected timeline. The use picture that emerges seems to be an X (place) Y (timeliine) dialogue that, as content builds, will offer a fluid view of the world as opposed to the typically more structural search result. [Apple’s Time Machine utility offers a barely analogous experience.]

My first post there references a powersports industry riding event in the Sierra Nevadas that’s discoverable by location, time, author, tag and title. Like a blog, and like tweeting, Intersect has a friendly feel and intuitive functionality that by combining original content with linking feels like a kind of magazine. Will Google find this interesting? Magic 8 Ball says, "no need to cross fingers - done deal."

The backstory on Longshot Magazine’s guerilla publishing enterprise provided a solid metaphor for the conference: experiment, use all the tools in your kit, keep what’s good and shape it in the crucible of the technology du jour.

Founder and executive editor Mathew Honan sketched out the scenario by which a self-funded, web enabled vision came to reality. It’s easy enough to point out that there’s not much new at work here, using the scaleable raw efficiency of software to clobber the hell out of a publication production cycle, versus the dino days of waiting three days for copy just to be set. But the larger point being made was the force for collaboration across distance that came out of the mostly experimental work. The end result is a tasty little snack that’s perfect for a content hungry web now serving diners at the mobile device counter.

Exceptional sites like Blogher are built on a delicate recipe of organic content and current technology, capable of attracting and retaining audience/community by creating the gold standard of social media: a personal bond based on trust and mutual interest. At the same time, concepts like Intersect have considerable PR (commercial) potential far beyond simple amusement. And projects like Longshot exemplify how communications could look in the contest to attract community.

It might follow that by knowing with certainty where, and how, to aim messages in an endless universe of lookalikes is the new definition of success. Bob Garfield tackles this challenging landscape in his December 8 column for Ad Age.

The Poynter P35 project delivered real vision for those concerned with communication’s professional future in a publishing environment where every reader has their own press and a global stage on which to publish.