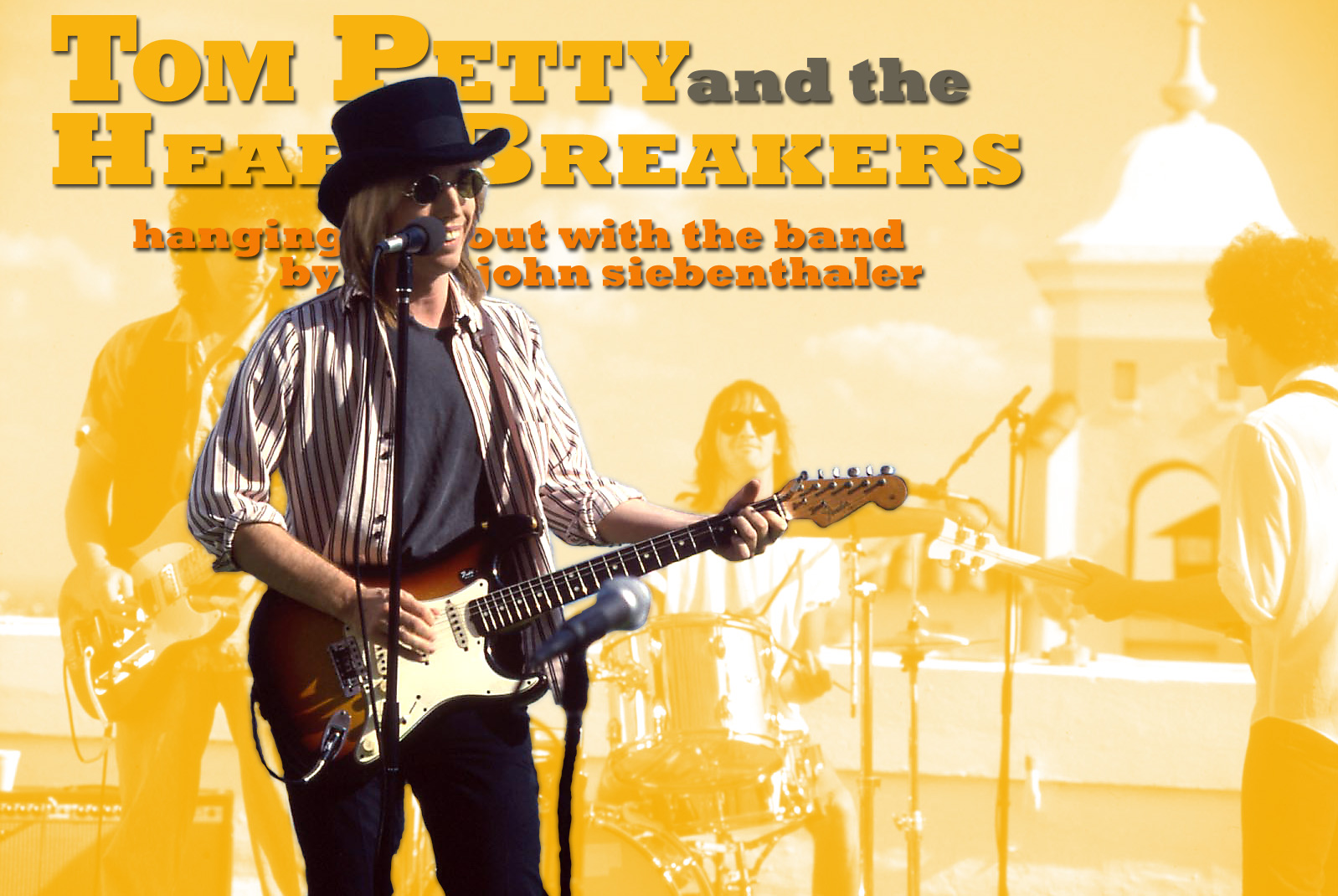 Once In A Lifetime Gig With The Heartbreakers 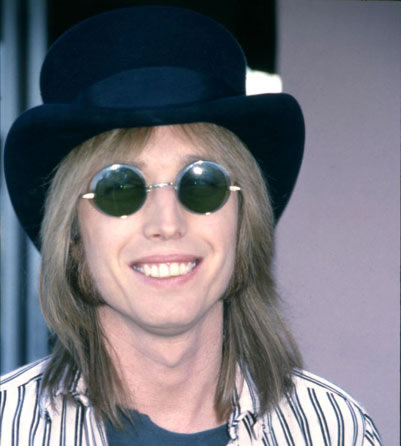 I was still in Gainesville when Petty’s original band, Mudcrutch, began gaining recognition in the early ’70’s. That name didn’t stick, thankfully, but the next iteration did — 30 years later, the Heartbreakers are still filling seats, and the Superbowl XLII (2008) halftime proved their status hasn’t waned. 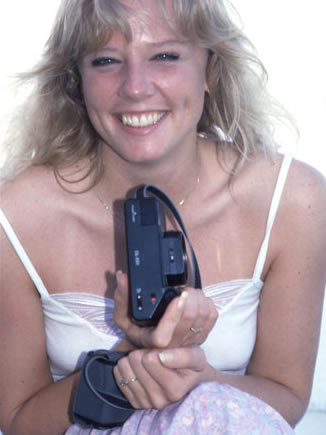 I didn’t have a clue who Wish was at the time, but turns out she’s Alice in "Don’t Come Around Here No More," released on the "Southern Accents" album one week later. We shared an elevator ride to the penthouse.

My attempt at nonchalance was severely tested as I tried to stay out of the scenes shot by the MTV video crew.

Rockin’ on the rooftop, Petty style. To the left is Boca Ciega Bay, to the right the Gulf of Mexico. Head straight and eventually you’ll bump right into Sarasota.

Periodically I’d peer over the balcony and imagine what the tourists were thinking.

Nine stories down below they could hear the free concert, but had no clue who was cooking up the sound or where it was coming from. It wasn’t long before boaters began showing up, and who knows how far out to sea the tunes carried.

(updated October 4, 2017) The day I met Tom Petty and his band, April 21, 1985, is a wink of an eye in terms of time passing. About the same age, I was a different person then. I don’t think he was. Unassuming, approachable, personable. Genuine comes to mind, 30-plus years later.

I was a student at the University of Florida when he was taking his first steps on a road that didn’t come with any guarantee. We had Gainesville in common.

There wasn’t any pretense, no vulgarity, no need to act out in order to compound who he was — celebrity aside, he was a good ol’ boy indeed. A life well lived. A life cut short.

(ST. PETE BEACH, FL) I wasn’t a huge Tom Petty fan in ’85, with the major exception of his trademark hit, “American Girl”. I tapped my toes because of its track back to Gainesville and for me a connection to Dubs rock ’n roll go-go girl hangout on 441, out on the the outskirts of town, a spectacular backbeat, and of course that whacked out intro. Toss in the slightly out-of-synch harmonies and you’ve got a not-so-instant classic.

When I got a call to shoot a gig at the Don CeSar hotel in St. Pete Beach I thought, "Yeah, ok, no big deal." In all the years before and since, I’d only been there once — to shoot a friend’s wedding (his third but not last) just the month before.

I showed up at the Don on time, nonchalantly headed to the desk, pointed to my equipment, and asked where I could find The Band. Yeah, right. No, seriously. Uh, here’s my driver’s license? Okay then just call the room. Turns out, they did. And just like that I was in.

The deal was, Tom had broken his famous hand a few months before and this was the first time since his surgery anyone would have any idea of whether or not he’d still be able to play. Hard to believe now, but before round-the-clock cable blabbermouths hooked mostly on self-adoration and stupidity, it was possible to embargo news to either prevent or spur speculation.

So there I was to record the moment of truth, shooting stock on a referral from Tampa buddy and ace studio shooter Terry Drymon. (Terry had an infamous art collection of model’s other lips on the wall of his studio dressing room. First timers there couldn’t quite figure out how the lipstick impressions on cocktail napkins were created.)

Just me, and MTV in full music video production mode. Which obviously was a huge clue if you were wondering whether or not there was any doubt about whether or not Tom still had a career. I wasn’t that sharp.

The Way It Was, Then

In 1985, there weren’t any automated digital point and shoots, no desktop publishing, no built-in templates and, for purposes of this little tale, no Photoshop.

Neither were there personal computers, damn few cell phone bricks, and fax machines were a status symbol that weighed a ton and cost a fortune.

Photoshoots were covered the old-fashioned way: load up on film, make sure you had backup metering, check your automatic lenses to make sure they would, in fact, automatically stop down to the set aperture when the shutter banged across and then reopen, load everything up and haul the assorted luggage around, through, up and down whatever obstacles popped up.

What I remember is, as metering — first analog, then digital — became more precise, so too did the fanatic obsessive-compulsive behavior to constantly check the reflected light. Not like anything would be changing if, for instance, the assignment would take place on a penthouse patio underneath a brilliant and beautifully beachy Florida spring day.

Lets just say for the sake of discussion we’d be shooting Ektachrome 200, which in this instance would come out to something around f8-11 at 1/500th. More or less, with no bounce off the Astroturf, as it was then referred to, covering the patio.

You With the Band?

I met Wish, who starred as Alice in “Don’t Come Around Here No More,” in the elevator. I didn’t know. This being my first, and last, exclusive assignment shooting a genuine superstar rock group I was more than a little apprehensive. It was only when we both got off on the top floor, me rolling my case dolly, that I figured out she was with the band and proceeded to follow her to the room.

There wasn’t any pretense about the group. The atmosphere was relaxed, the mood laid back, and I was silently praying to the Kodak gods that my putting off overdue lens overhauls wouldn’t catch up with me today. Please, let me capture something worth smiling about.

We mostly waited while the video crew finished laying track and setting lights. When they were satisfied, the band and one way out-of-water photographer headed out onto the patio and in the next few moments I was introduced to the difference between top of their game professional musicians and club bands playing covers. Bang! Straight into "American Girl" and immediately everyone was grinning like Santa came early and the tooth fairy left Travelers Cheques. One word describes the sound — tight. Yeah, these guys really are that good.

Like rock, don’t like rock, it was infectious. Here we were on a beautiful sunny spring day in Florida, on top of a four-star hotel looking out on the intercoastal in one direction and the Gulf of Mexico in the other. About three or four songs into a set that would last nearly two hours, the guests gathered around the pool were trying to figure out what the hell was going on. They knew the music was pouring down from the heavens, but how? Time passed and soon boaters who’d been chased down by their pals began rafting up on the beach and before long you could definitely say…it was a concert.

I kept shooting throughout, even though about the only thing that changed was when Orlando’s Channel 9 chopper dropped in out of the clouds, adding their whap-whap-whap to the band’s output. And then it was over. Hotel security finally decided they’d had enough of the complaints and called the show. Late that same afternoon I shoved however many rolls through the film drop at the lab over in Tampa.

A few weeks later I’d watch along with 60 or 70 million other close friends as the Heartbreakers kicked it in Philly for the American finale to the Live Aid session that started in London.

At the time I was riding a 92-inch Harley Shovel “Blue Pearl” chop, featuring full frontal Frazetta-style airbrushed nudity on the tanks with drag bars and pipes to match the attitude. Riding home from the bar that night all I could hear was a song about an American girl, out on 441. And I sorta’ understood what it was all about.