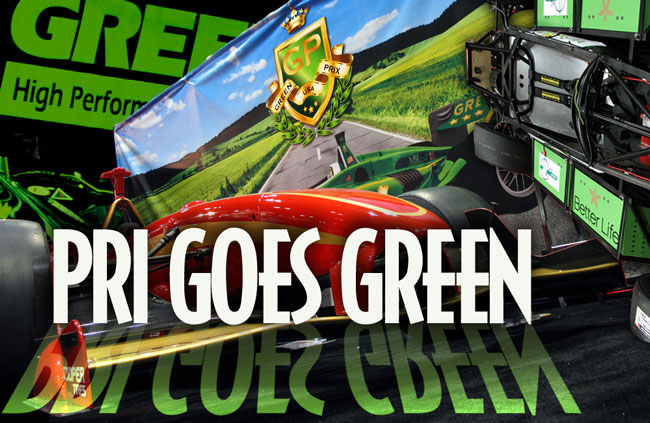 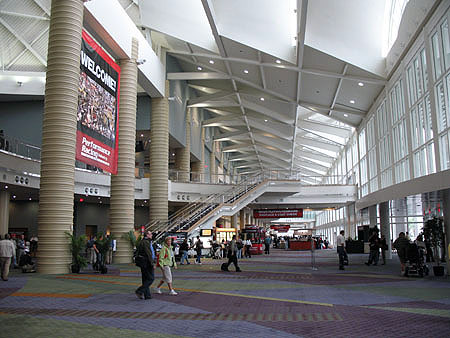 (ORLANDO) Look. Listen. Learn. If ever an event offered a sneak peek at how their audience — motorsports and little brother powersports — might look in the decade directly ahead, the 21st Annual Performance Racing Industry Trade Show delivered plenty of insight, not all welcome, for these tumultuous times.

summary Big stakes corporate marketing’s on the skids unless and until the pr benefit is 20/20 clear and immediate. Sensitivity to stockholders, renewable energy and clean air is the new religion. Get your ROI metrics ready and have a crying towel handy.

trends Green was on everyone’s mind. Green, Big 3’s survival and sponsorships, though not necessarily in that order.

The environmental performance wave may not have been a tsunami sweeping the 3,900 booths spread over a million square feet of show space — folks, that’s a lot of walking and talking — allocated to the 1,350 exhibitors. But green was one of the major elephants in the room, as battery power and emissions tag-teamed attendees for their attention.

new Renewable and sustainable energy evangelistas included Green Prix and Thruxar, each serving up decidedly different strategies for lassoing the same steer. At the time of the show, four buck a gallon gas was still a red hot issue and one of the major factors necessary for green strategies to really take off.

Green Prix thinks a spec class racing organization that focuses on affordability, sensitivity and familiar performance will win club converts, according to VP/Development Jonathon Canott. And what they’re offering sponsors is a billboard opportunity to connect with a younger, greener audience that might otherwise ignore racing’s appeal.

Thruxar offered an alternate choice — something that might well show up on Planet Green, as they displayed their battery powered single-seater that just got a shout out by the EPA as the American Le Mans Series model of clean and sustainable racing. COO Andy Gillis is looking over the horizon for technological improvements in the clean energy category to begin flowing as a result of government investments in the industry.

We talked about the unique advantages, and challenges, of battery power: noise abatement is obviously not an issue, neither is air quality. Still to be decided: how important is the roar of an engine in the overall spectator experience?

showdown At the top of everyone’s mind, though, was Detroit’s survival and what the outcome would mean for the major performance sanctioning bodies. With the Daytona 500 an hour’s drive and two months away the writing was on the wall — the walls of the team transporters that were already for sale.

As the show opened, the Big 3 were set for a takeout barbecuing in the form of government loans delivered by a lip-smacking Congress and it wasn’t clear how that would play out for constituents of either entity. Turns out, some taxpayer-backed rescue money was doled out, after the public spanking delivered as a response to the private air fleet used back in November to deliver the startlingly tone-deaf CEOs to their DC interrogators.

The mood throughout the hall regarding corporate support of racing’s premier events; NASCAR, ARCA, NHRA, etc., was stoic. Clearly understood was the impact several different and powerful steering currents — economic and environmental — would have on the future of motorsports. 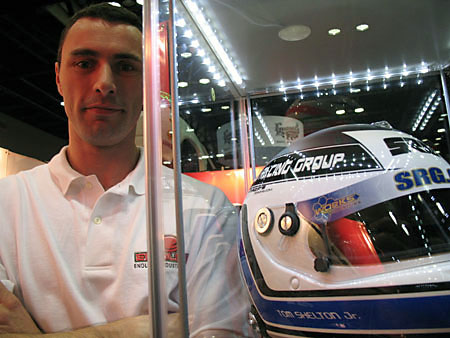 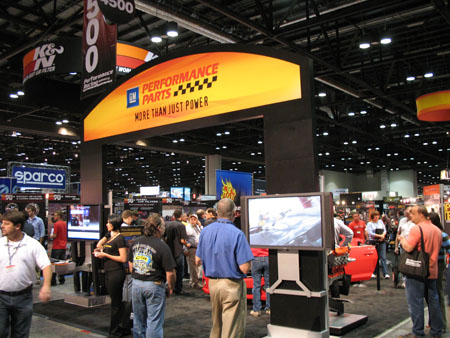 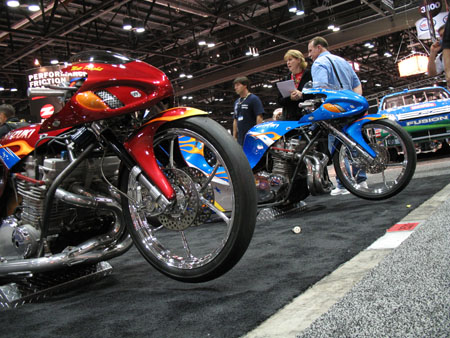 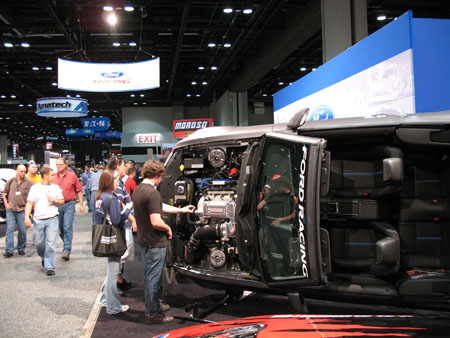 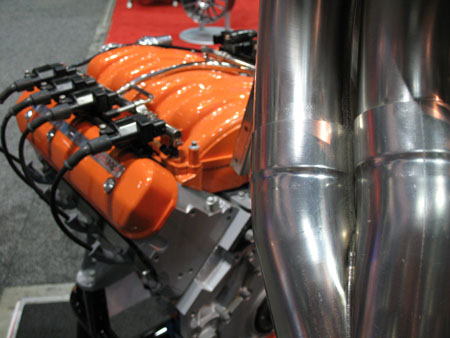 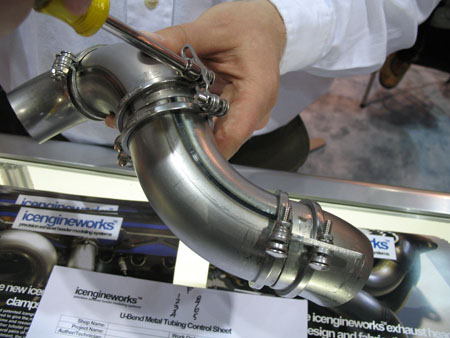 2nd row L GM made the show even as top execs were grilled in DC.

3rd row One of the major rewards of attending premium events like PRI is the opportunity to learn the latest in display techniques. Ford Racing’s Mustang was an eye-opener: clean, imaginative and effective.

My book on whether or not GM, Ford and Chrysler would be on the floor was maybe 60-40. A slight sigh of relief by every one of the 40,000 builders, dealers, teams and track operators was barely audible as they descended the escalator down to the show floor and exited right into the corporate arms of GM, MoPar and FoMoCo.

inside To get a feel for the PRI show, wrap your imagination around a massively huge warehouse, one with sight lines stretching from here to there and back.

Over one million square feet of unimpeded exhibit space mated to usually chamber of commerce weather, ease of destination and plenty of outside the show entertainment, gives this event a solid ten out of ten on the trade event scorecard.

The mood was subdued but, based on the daily dose of economic bludgeoning doled out as the country headed into a stocking full of coal Christmas, funeral black wouldn’t have been unexpected.

There were scattered unfilled booths that escaped last minute consolidation, and it seemed as though an aisle or two was missing — fine with me, as elbow room was plentiful and the booth scrum was dialed back. As it was, the overall tone was purposefully busy, not crowded, realistic, not fatalistic.

easy There’s no need for tacking and jibing in order to see every booth. Just follow your feet up one row and down another aisle. If I had just one wish, it would be for cush carpet. (Counting calories? Bring your pedometer for a cheap feel good moment.)

The simulator vendors had a steady stream of takers lined up for test rides. This is one channel that’s increased exponentially as chip prices have dropped and speed’s increased.

Noticed this year were the relatively inexpensive laptop based modeling CAD software packages that can reverse engineer designs by plotting laser generated data points along the X, Y and Z axis of models.

Audience data was collected using Bluetooth response meters that instantly displayed the numerous poll results onscreen for discussion. Data collected was also split between panel and audience opinions, and in more than one instance there was a significant divergence. At the end of the session one thing was clear; there was no consensus on whether to battle or embrace an online selling strategy, off price or otherwise, for staving off customer hijacking.

finish The ride back to the hotel each evening offered additional proof of how well thought out this show is. Well-stocked coolers of Bud on every shuttle at the end of the day are just the thing to take your mind off aching arches, and it shows respect for the attendees as well.

After hours spent wandering the five or so miles of aisles that make up PRI, the conversations overheard as the buses retraced their routes revealed that regardless of how fate treats the high dollar high maintenance rolling billboards we’ve come to think of as the norm, motorsports itself is very much alive and well.

No matter what happens in the nation’s boardrooms, the basic fascination with wringing performance from what usually begins life as daily transportation isn’t going away. Motorsports began as a Saturday night fan-driven activity. And by all indications, the fans will be just fine.