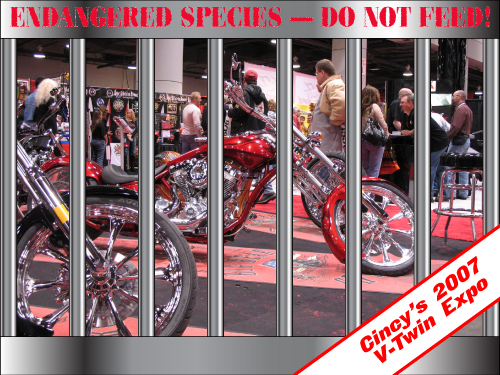 Quasi-custom bike segment numbers are way down with no recovery in sight. Primarily dependent on aging boomer demographics, market for limited use lookalike cruisers has been saturated while interest in touring capable rides is exploding.

(CINCINNATI) I have a distinct recollection of the pilot coming on the cabin intercom as our plane prepared to taxi into position for takeoff from Tampa, severly buffeted by a hailstorm of balmy breezes and rocked by thundering sunshine. He calmly announced the ground temperature in Cincinnati as minus something something and — now here I’m not sure as to intent — saying it wasn’t too late to get off the plane before the wheels left terra firma.

Such is round one in the familiar scenario of powersports trade events held against the slushy sloggy frozen backdrop of depressingly gray midwest winters. We’ll just chalk it up to that insurmountable frontier spirit that pushes on with single-minded determination when a perfectly sound, easily reached detour named Orlando is close at hand.

Once on the ground in Covington and on my way to the convention center, hypothermic weather worries faded into the background as the familiar sight of manufacturer’s semis circled around the block made clear the point that the ’07 selling season was officially underway.

Against that backdrop came a strong whiff of fresh ideas in the form of bagger alternatives. A gaggle of them in fact. Indeed, the resurrection of a mode of transport that actually makes sense and looks good doing it inspired one tee with the shout out slogan to, "Get a bagger…and carry your own crap!" Indeed.

Coming Soon To Your Local Dealer Beneath the surface the mood was of a market in transition. There’s not much argument now about the point that boomers have driven the alternative market over the past decade. For a variety of reasons — economic, demographic, geographic — that market is moving on.

Overall there seemed an air perhaps not of uneasiness but maybe unsettledness that derived from the all but certain implosion of the crate chopper that’s driven the American Other market segment for more than a decade. That that market’s experiencing serious culling was manifest in ways small and large.

And right about now it seems baggers are the reality for the near term — and maybe the long term as well. You can play your own version of connect the dots by taking a good look at the R&D that’s gone into Victory’s lucious-to-me new prototypes and covered in the Dealernews writeup. Polaris has definitely done their homework and I think they’re dead on with their marketing model.

And if a plethora of new product wasn’t enough to signal a market sea change, there were a couple of nifty new books out that, not so incoincidentally, featured "Bagger" in the title. Primedia floated their test ballon, "Hot Bike Baggers", against Dave Withrow’s new pair of pubs, "American Cycle" and "American Bagger". Call ’em whatever you like, the end result is comfort, performance, and capacity. Only now with some individualized attitude to go with.

Attending a trade event like V-Twin Expo is done for a variety of reasons. Over the years one of the major goals is to try and identify breakthrough technologies. This year, that technology came in decidedly small packages.

Bluetooth On The Way One of the more obvious, though perhaps not so much of a must-have for the v-twin crowd, is the emerging Bluetooth wireless sector that’s inexorably becoming fully integrated into new helmet technology to create an onboard communicatons center capable of combining telephony, navigation, intercom and entertainment functions in one convenient package.

Take this to the bank — in the near future there’ll be a heads up display package combining gps and some kind of look back video, full sensor and motion instrumentation, weather conditions, and road and traffic alerts.

As an aside, Ricoh cameras introduced a fully functional on-line capable GPS still/vid model in January that captures coordinates, records tags, etc. using Bluetooth connectivity. Think what that means to off-roaders recording their adventures enroute and then uploading the results to Google Earth and MySpace. Do we need it? That’s beside the point. If they build it, it will sell.

It Really Is A Digital World What really caught my eye was the seeming perfection of BDL’s affordable, tuneable, and practical EFI for HDs and clones. This is one slick package of computerized precision, a well thought out application that can improve fuel economy, emissions and performance at the same time. The tidiness is primarily due to the nifty integration of the pump and fuel return in the fuel petcock, making for a two-wire install that can’t be beat. Integral to the kit’s performance is their own programmable ignition — truly a plug and play for a major performance upgrade.

And there was S&S’s new wedge, which drove the lion’s share of show buzz. It’s a variation we’ll see a lot of for years down the road, as the company finally makes a statement about growing a truly new branch on the v-twin family tree.

One of the advantages of V-Twin is the compactness of the venue, the fact that you can cover ground quickly or take your time and not miss out on what’s new, and the certainty of an annual renewal of old acquaintances. Still, the lack of major new product (save for S&S) intros or innovative marketing applied to old concepts translated into a lack of fresh buzz.

It’s hard to believe a decade’s passed since Dealer Expo moved 100 miles west — or that it ever could have fit in the cozy confines of the Duke Energy Center. What’s even harder to imagine is that the same venue’s now approaching maturity with the single segment v-twin market.