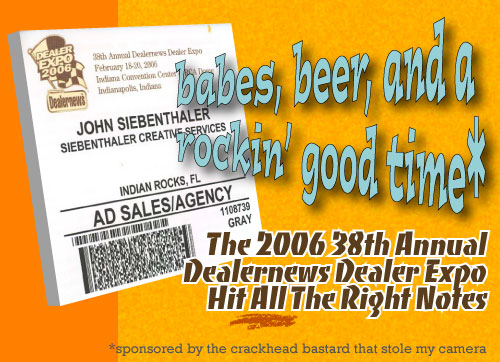 TRENDS
Mirror, Mirror, On The Wall

(INDIANAPOLIS, IN) Thanks to the thief who stole my camera from the last booth on the last day an hour before catching my ride to the airport, no event pix this year. More’s the pity, because this year saw a quantum outlay in effort and expenditure as exhibitors seriously amped up their marketing presence.

Instead, the focus is on flavor and nuance as opposed to the really great looking women, over-the-top displays, and cutting edge new technology that was lost in the form of a flash card sauntering down the isle inside a past prime Canon Powershot A70.

The 38th annual Dealernews Dealer Expo lifted off Saturday, February 18th, from the Indiana Convention Center and RCA (news on that later this year) Dome, as it has for the past nine years since sidestepping 96 miles from its former Cincinnati outpost.

Nature Abhors A Vacum Ever since that move, turmoil has more or less been the byword as the (domestic) V-Twin crowd jostled and lobbied for a show within a show before pitching a Cincy tent of their own six years ago. For now, that show’s succeeded in siphoning off nearly the entire segment dedicated to Harley and American other brands.

It hasn’t been seamless, but this year, for the first time since the post-exodus Sturm und Drang began, everything felt right. The tension marking previous years finally seems to have been laid to rest. As a result, the number of pure V-Twin entrants could be counted on, well, one hand, or so it seemed. There was Tedd’s, and Axtell, and…

But to miss Indy is to miss a huge segment of the powersports aftermarket and the goods they bring to the show that might just make the difference between some and enough profit.

We’re Definitely Getting Younger Then there’s the increasingly obvious issue of demographics. Even the most casual observer can’t help but notice the age profiles of the attendees. This may be controversial, it’s definitely subjective, but it’s inescapable; the V-Twin aftermarket segment’s aging, the gap is striking, concern is building, and no one at this point seems to know what or how to stay the trend.

It’s fair to say that of the two events, Indy represents the youth market and with it, the potential high ground for the future.

Despite aberrations like American Chopper, growth in new bike sales, referred to by Cycle World publisher Larry Little in comments delivered to industry leaders Saturday night, shows that purchases in the past three years (3-mil plus) surpassed the new registration total of the previous decade (3-mil plus.) That is, to quote Mr. Little, “…an amazing statistic.”

Call it a wild hunch, but those numbers are driven by consumers who aren’t the least bit interested in the ramifications of Medicare Part D as it may affect their personal lives over the next few years. And it’s more than a hunch that the gender, age, and background cross-pollination that formerly existed between the markets has disappeared.

Is it possible that, by enthusiastically putting so much distance between themselves and the much broader powersports market in general, the V-Twin segment’s unintentionally cast themselves adrift on an ice floe of their own making?

If This Was Your Booth, You’d Be Retired By Now Throughout the three-day expo, the vibe was positive, reinforced by the numerous professionally done booths that helped transform the exhibits from a predictably passive warmed over industrial gulag into a vibrant and enticing summons to participate in the moment and learn about the product.

In that category, my vote for Best of the Bunch unequivocally goes to the arachnid-in-chief, Eric Anderson, and his ultra-smooth crew of demo experts and order takers.

Fresh from last year’s decidely edgy Scorpion Lounge extravaganza, Eric thought what was needed for ’06 was a mall approach, and went about transforming the former Green Zone (bad word association) into a very comfortable, buyer-friendly open space of hands-on product features, rows of user-participation merchandise, and a petting zoo. Yeah, that’s right: guess the genus, avoid getting stung. In short, he owned the space.

The Scorpion EXO crew showed up in original attire that actually matched the theme, not the done-to-death pit row patched out uniform motif that’s become de rigueur. Their job was to first welcome anyone on the periphery, steering them to one of several highlight (liner wicking, anti-fogging, etc.) setups, answering any questions in the process. It worked. And how. Combine a better mousetrap with an imaginative setting, then worry about the stampede to follow.

The 50’ x 60’ booth served to launch the newest hat in the barn, the EXO 200. With a price point several notches down from the second mortgage ridiculousity of others, with safe construction a given, and with styling that suits the purpose, it’s an easy to reach purchase decision for consumers – including the writer – to make.

Another entrant in the nifty booths that work category was the WARN total immersion setup that featured plenty of dealer inspiration on how to bump the customer’s imagination into overdrive. Think Hummer and you’ll get a pretty good idea of the difference a few fake fiberglas rocks can make.

The Hottest New Trend The low level but getting louder buzz elsewhere revolved around the rapidly emerging areas of personal technology, how to mount it, and how to use it. tomtom came to the show for the first time, with their motorcycle-specific GPS now available in North America. Wildly popular in Europe, this Dutch design debuted on OLN during the recent Dakar Rally and is now distributed through regular consumer electronic channels, including Best Buy and Circuit City.

Bluetooth is the protocol that vectors the interactivity of the various devices: cell phone, mp3, gps, radar. The integration of these and other technologies into our daily routine is quickly turning into an avalanche of must-have consumables.

But before any of this can occur, a safe and reliable mount is necessary to hold the several hundred to several thousand dollars worth of tech gear riders now carry with them on a routine basis.

HighGear Specialties’ Techmount (disclaimer: client) has filled the void in an elegant and bulletproof fashion, with their patented line of stem, clamp, control, fairing, and custom mounts.  Compared to what’s been offered in the past, Techmount might be likened to what disc brakes did for drum – it’s that good.

Atmosphere On Tap Other show highlights include the beer garden atmosphere that erupted out of nowhere. In the main hall down at the end of the isle was Scott Cowen’s Annitori booth, serving sponsor Corona’s draft on demand from the upstairs control tower. O’Neal did likewise, enabled by a beach party blast from the past, complete with VW micro bus, surfboards, and tiki hut. So numerous were the free refreshment options, it was entirely possible to go home with your beer budget intact.

Over in the dome, Red Cat had their body-painted tee-tossing felines working the audience gathered at the tower base and gazing sincerely skyward in hopes of snagging a throw. You’d of had to have been there.

The Ground’s Shifting Finally, with Expo again bulging at the seams, how to explain the net gain even after the loss of the V-Twin aftermarket? In one word: China. The Orange Zone of previous years has morphed into the Chinese Pavilion, this year housed entirely in the Marriott and impossible to miss – or ignore.

Of course, Chinese manufacturing dominates the powersports industry, but Chinese branding is quickly emerging in a way that may – will – create some big challenges and possibly major headaches in the years ahead.

Add to that the entry of South Korea as a major player, and it’s safe to assume a major culture shift is happening in the way we view powersports in general. For a peek at how marketing trends will be influenced down the road, Google Chinese wedding and interpolate the colors, textures, finishes, shapes.

Leaving for the airport Monday afternoon, the disappointment of having my best effort ever event photography stolen did little to dampen the overall enthusiasm for a really enjoyable Dealer Expo. There’s been a major shift in the way the market’s viewed, pursued, and ultimately shaped. It’ll be interesting to see how it all shakes out in the months and years ahead.