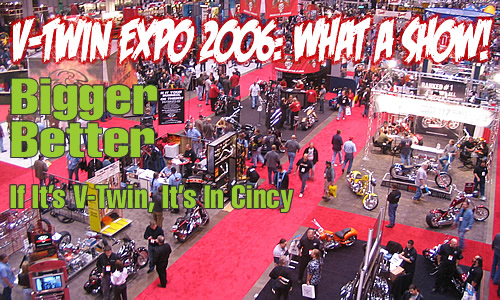 (CINCINNATI) Ahhh, to be in balmy Cincy in February. Picnickers line the banks as the Ohio river flows lazily downstream. Flocks of flamingos shuffle along the shore, effortlessly searching for brine shrimp and krill. Flawlessly tanned young women in t-backs seek out a not-to-secluded spot to toss down a towel on the sand, unhook their tops, and get serious about sunning. It’s – oh wait, that’s not THIS Cincinnati.

No, my plane left Tampa at 7:30 a.m., fresh into the second half of a day-long monster thunderstorm, and the roller coaster ride into the Ohio valley meant anyone who’d embraced that hearty Denny’s pre-dawn corned beef hash and eggs over easy breakfast was that much lighter on landing.

All this talk about the weather is framed by the experience of having just attended the Performance Racing Industry (sorry, no photos allowed, but boy, you shoulda’ been there) show in Orlando last November. Over a million square feet of exhibits, five miles of aisles, and chamber of commerce blue skies and fair temps left the tens of thousands attending wishing for a few more days in the Orange County Convention Center.

Nevertheless, the ride in from Covington, through intermittent rain tinged with sleet, was in many ways preferable to ‘04’s way sub-zero temps and frozen beer and bar nuts puke left in the drifts outside the hotels. It’s just what is, and the weather did little to dampen the larger-every-year herd of manufacturers elbowing their way onto and above the main floor of the Cinergy Center to exhibit the latest and greatest in V-twin merchandise and technology.

Enkay Polishing’s kits are designed for hand drill use by consumers and pros alike.

And yes, the fat lady’s sung her last note. This IS the show for American Other, a phrase first coined by IronWorks’ Dennis Stemp years ago that did then and still perfectly describes the offerings. That category has also been typified as anything “billet”, which in practical terms defaults to polished aluminum, from primaries to master cylinders.

Interestingly, though there’s never been a shortage of finishes, keeping the part in a chrome-like state of finish hasn’t been that easy. Enkay Polishing enters the fray with a consumer line of polishing kits for shop and garage that help make the chore of maintaining a factory fresh appearance a little easier.

Interesting also were the exhibitors who in the past shunned the lifestyle atmosphere of V-Twin, but who’ve since realized that if you want to sell American v-twin, you go where the buyers are. It was, in terms of variety and depth, a show that just keeps getting better. Every aisle was filled with acquaintences, and the rule of thumb was to walk ten feet, talk ten minutes, repeat, especially true for pals from my Easyriders days.

Others worth noting included Berry Wardlaw’s Accurate Engineering over the top engine shop. Berry’s getting set up for in-house EPA certification, so anyone who’s ever imagined one of his trademark retro builds sitting in their frame in their driveway will have ample oppotunity to indulge down the line. And speaking of, there were several frame manufacturers noted whose quality construction was self evident and in stark contrast to a lot of the just plain dangerous junk that’s floating around.

As to dealer attendence, that was hard to judge. Just about every booth queried on the subject said they’d run out or were running short on promo materials, so someone was picking up collateral. On the other hand, marketing materials in general seemed to be less plentiful than in previous years. The floor, for the most part, was generally free of congestion, which meant a very easy time getting around.

The return ride to the airport was in the company of a couple of northeastern shop owners, both of whom gave a big thumbs up to the show, said they’d found a lot of merchandise they liked, but no, hadn’t bought but were thinking about a few items of interest and might once they’d done the math. So much for impulse in the new economy.

The guys at Cadworks turn out deep drawn components for the biggest names in the industry.

Noted for a special shoutout were the booth contents of Cadworks and SpieglerUSA. Their respective products feature sheet metal and hydraulics, but all things are not created equal. Cadworks is a Southern California engineering firm whose clients come mainly from the aerospace and aircraft industry, but whose technology is perfectly adaptable to the powersports industry.

Cadworks designs body parts – tanks and fenders – for production by deep drawn forming. They’re able to render in meticulous detail compound shapes (steel and aluminum) that are formed in a consistent, predictable manner, maintaining a uniform thickness and without introducing stress.

You can learn more on their web site, but I was impressed with how economical the process is and how repeatable the parts are once the initial engineering and molds are finalized. Cost to manufacture is very low, without sacrificing quality. Oh, and the fact that it’s all done in the USA gets major snaps as well. 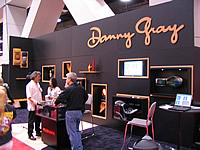 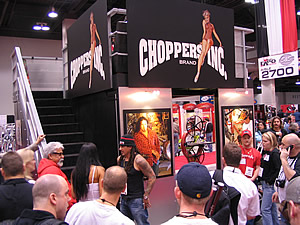 Think all fittings are created equal? Guess again. Spiegler is one of those companies that revives your faith in mankind. Just when it seems as though the Chinese outsourcing stampede was complete, here sits a perfect example of European obsession with detail in a form following patented brake line function. And since the form is brake lines, the function part proves there’s always a better mousetrap.

If you’ve ever been ready to ditch the braided and bend your own steel lines because you couldn’t get the python-esque kinks out of the hose, here’s your answer.

A nifty little piece of plastic bar, an even sweller two-piece clamp for a bench vise or vise-grip, and you can now set the angle of the banjo fitting quickly and easily, resulting in a straight line vinyl covered braided line that doesn’t look like a boa constrictor sucking down it’s last meal.

Danny Gray’s booth got a big thumbs-up from everyone for Best Booth In Show. Billy Lane was there, posse in hand, for meet and greets that left his corner of the spectacle looking like I-75 through rush hour Atlanta. A couple of aisles over was Roger Goldammer’s booth, more restrained, smaller, less glitz and glam, yet arguably setting a fresh new standard for innovation and execution when it comes down to rubber on the road.

Yet another symptom of change that’s becoming more and more prevelant: tv coverage. Specifically, cable. Seems like every other booth was doing a standup for later edit and broadcast on the growing number of outlets that are trying to win a v-twin market.

Trade shows. Not always easy to attend, not always situated in the venues we might otherwise select as best for us, but still the best way to quickly come to terms with what’s new, who’s moved, how’s business, and in general what’s shakin’.

And that’s not counting all the great ways to get your hands on actual product, to pick up, turn over, sit on, kick, or otherwise get physical feedback about something you hadn’t realized had changed or something brand new on the scene. Come to think of it, it sure beats wallowing in a stuck in traffic crowd on Main Street that just can’t wait to drop five bucks on a warm beer in a plastic cup.