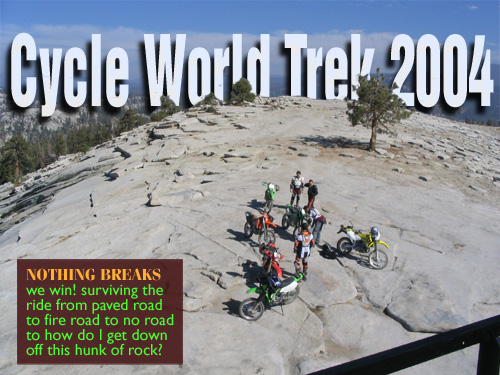 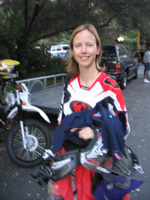 The motel parking lot was my first look at a trip roll - a casual introduction to the established practice of following a hazardous route with one's head cocked sideways, looking down and reading through filmed goggles, while desperately trying to avoid sailing off the cliff I couldn't see the edge of before it was under my front wheel.

CW editor Paul Dean put my riding mind at ease with great beginner's tips, while ad manager Libby Hartung showed me how to start my bike. Uhh, you have to pull the clutch in, then hit start. We're not even on the road and I'm feeling a little pressure to perform.

I scrambled around assembling what I thought best suited the pack list in the info packet. The Under Armour dry fit (heat) shorts did an absolutely fabulous job of preventing chafing during my three days in the saddle.

(SIERRA SUMMIT, CA) The burgundy invitation peeking out from a stack of bills, junk mail, and catalogs vaguely mentioned Trek. The Tour de France having just finished, my first reaction was that this was direct mail trying to sell me a trail bike. Are they kidding? Not a chance. But lets take a second look anyway.

Good thing. That piece of card stock was my passport to the 30th Annual Cycle World Trek. It wound up being the most fun I've had on a bike since I packed both handlebar streamers AND clothespin-clipped baseball cards on my Schwinn 3-speed.

RSVP'd Nancy the next day, carefully informing her that I really didn't have any experience on dirt. In case there'd been some mistake. Her laughter, combined with the desk pounding in the background, gave a clue.

Googling “Mike's Sky Rancho” from the invitation turned up strange returns that didn't exactly set my mind at ease, with multiple references to cactus encounters, broken everything, punctured bike parts — against this backdrop, in nearly 40 years of riding my total (intentional, as opposed to accidental) off road experience was zero.

Riding at altitude came in a very close second — home is Florida, about a mile from the Gulf Coast, at one of the higher points in the county. That would be 35 feet, enough to exclude us from the all important flood zone, otherwise defined by the insurance companies as don't you wish. I was headed for 8,000 feet and higher. Would I need an EVA suit from NASA?

While waiting for the info packet, I made a couple of calls to see what was expected, and what was needed. Motorcycle Product News editor Robin Hartfiel was dead on with equipment recommendations, riding tips, and bike (KLX 400) selection. Well, he did miss the BLIZZARD THING, but overall his guidance was priceless, as was Scorpion Sports Eric Anderson's generous advice. Eric tipped me off to over-the-knee mx socks, among other offerings, and that, combined with the superb fit and wear of my new Sidi Discovery Tepor boots, kept me comfortable and upright throughout the Trek. Ridemaster Cory Eastman vetted my equipment picks, and with that it was now up to America West to get me there.

I shipped all my shiny, brand new FNG gear direct to Cycle World rather than risk having it take a hike while going through TSA what's-yours-is-mine baggage inspection. When I arrived in Fresno Thursday afternoon, it was just me and my backpack. After rounding everyone up, the Cycle World van headed inland for the Oakhurst Best Western, at the base of the Sierras, 16 miles from Yosemite National Park and about an hour's drive northeast from the airport.

That evening we were introduced to bikes and fellow riders over drinks and dinner, but with a full dress breakfast set for seven a.m. it wasn't long before the rack monster reeled me in for the night. My dreams were of being the only one there with their gear on backwards, singled out and being made to stand up front at the riders meeting as a perfect example of what not to wear.

The early morning rollout was my first full dress riding gear rehearsal. The motocross helmet was a new novelty, as were the boots ordered on Robin's instruction. The fact I was totally clueless as to how the cam fasteners worked was overlooked by the others, since we were all shuffling around in the pre-dawn darkness like a band of Velcro'd zombies.

Cory'd schooled me over the phone on the equipment assembly sequence; Under Armour dryfit went on first, then the MX over-the-knee socks, then shin guards, then pants, then boots. I'd packed a tube of A&D Ointment (aka "ass cream" as it was referred to by another participant, who herself needed liberal doses but not 'till after first nearly falling down laughing at my bringing a tube along so the joke's on her because she didn't bring any of her own) but whether due to luck or synthetics, it wasn't needed.

I finally got everything on in correct order — right boot on right foot, left on left — and as I lurched up the stairs towards the parking lot the noise my synthetic clothing and hard plastic attachments made sounded a little like a baseball going through a sheet of styrene.

Clomp slide clomp. Clomp slide clomp. Out to the parking lot, then a downhill slide 20 or 30 stories to the hearty breakfast buffet. A half-hour later, juiced, coffeed, and pancaked up for the day ahead, it was climb – or crawl – back up the hill (or, more accurately, the vertical incline) for the riders meeting.

Kuryakn's Marc Wolfram and I teamed up, and after a last minute tire pressure and gas check we pronounced ourselves ready for the day ahead. We roared left out of the Best Western, to our first stop about 25 yards up the road for an equipment adjustment. After that, it wasn't long before we left the pavement for trail riding country that was breathtaking, and would be even more so if my attention wandered in the slightest.

(back to cw trek)